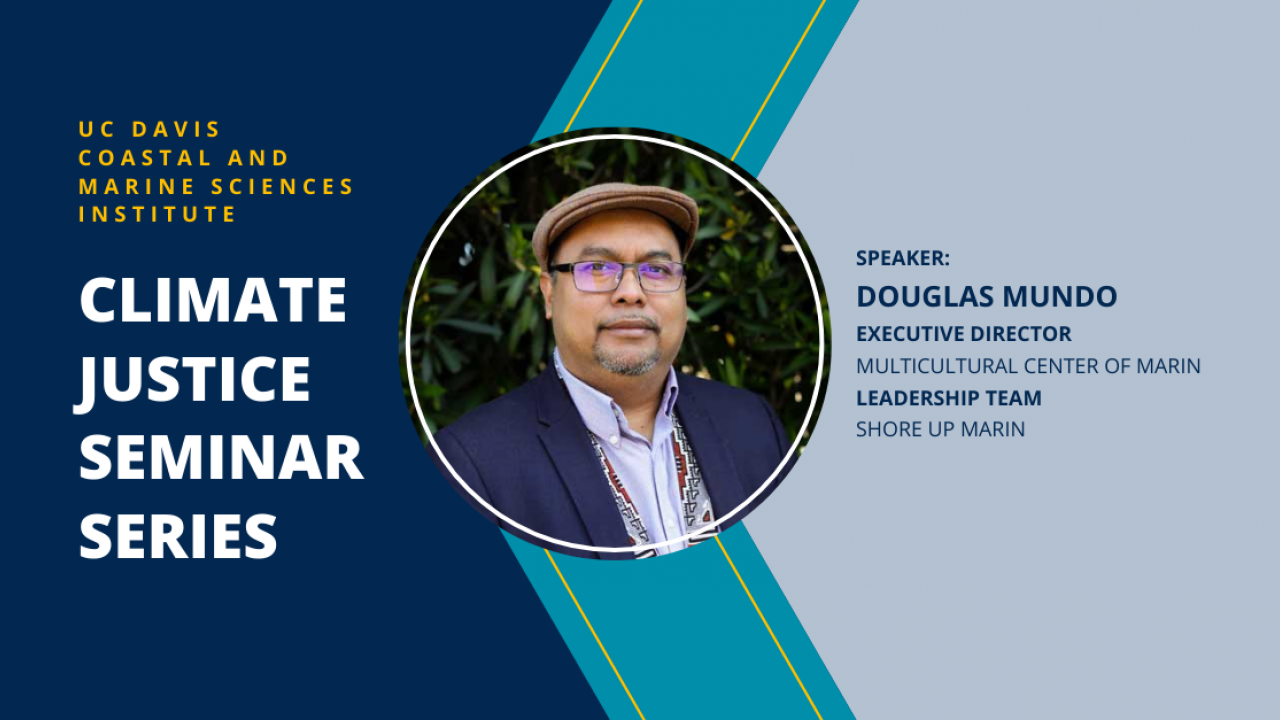 On March 15, 2021, UC Davis Coastal & Marine Sciences Institute hosted Mr. Douglas Mundo, who was the second speaker in the Climate Justice Seminar Series;  the series was designed to give scientists frameworks to leverage their training and expertise in support of the climate justice movement. Mr. Mundo is an expert in community organizing as the Executive Director of the Multicultural Center of Marin, an organization that works with diverse immigrant and underserved communities of Marin County to advance their social, cultural, and economic well-being through self-empowerment programs that encourage civic engagement. He is also the co-director of Shore Up Marin, a multiracial coalition advocating for equitable and culturally appropriate sea level rise adaptation and emergency preparedness and response to flooding.

On Empowering the Voices of Underserved Communities

“Our perspective, the community perspective, has always been left behind. We are the last people to be brought into the planning processes. That’s something that we want to change.”

Mr. Mundo is active in community organization efforts centered on environmental justice. Through his and his Marin City counterpart’s efforts, Shore Up Marin was born - “We started Shore Up Marin because we saw that there were a lot of environmental organizations in Marin, but none of them claim to be climate justice organizations,” he explained. Shore Up Marin is a multi-racial climate justice coalition that advocates for the voices of low-income communities to be included in decision-making processes regarding community planning and preparation,  fosters leadership and community engagement in underserved communities, and organizes the fight for climate justice throughout Marin County. These efforts are especially important within the Canal neighborhood of San Rafael and Marin City, in which sea level rise compounds existing inequalities of water and air quality, and social inequity that affects residents.

Shore Up Marin has also worked to educate and involve the youth of the community in their efforts; students at local schools were given the opportunity to participate in investigative field science projects in which they learned about the threat of sea level rise in their own Canal neighborhood and helped develop potential solutions. Getting young people educated and involved in these issues is critical so they can be prepared to advocate for the necessary policy and adaptation changes during their careers and lifetimes. All members of the community were encouraged to participate in tours (walking, kayaking) of the San Rafael Canal area to learn about which areas are most vulnerable to earthquakes and climate change risks such as flooding and fires. These educational efforts led to community members’ participation in nature-based adaptation and restoration projects, such as that of Tiscornia Marsh, one of the most vulnerable regions in the neighborhood to sea level rise. All of these community engagement activities empower residents of underserved communities.

“By ‘empowering,’ we mean ‘building the capacity - the capacity for those people or organizations or groups to try to improve the quality of life for their communities, and also to protect us from future natural disasters.”

Low-income, immigrant, and underserved communities have historically been put on the “back-burner” within city operations, and often consulted last or not at all in city planning decisions; this is in part due to an often unwelcoming and non inclusive atmosphere at city council meetings that estranges these communities. For example, many people living in low-income communities face barriers taking time off of work to volunteer or attend city council meetings like more affluent members might because they are often preoccupied with daily survival activities such as working full time, paying rent, taking care of their families, and more. In addition, people for whom English is a second language can feel particularly helpless in affecting change for their communities. In order to welcome and empower people of all social classes to take action towards combating climate change within their communities, Mr. Mundo and his organization have provided people with food, childcare, stipends, and translation services to encourage everyone to attend local government meetings and participate in community events. Mr. Mundo reiterates that these measures to create inclusion of all communities are key - “Equity without inclusion is not going to work.” These kinds of resources provided by Shore Up Marin and the Multicultural center are crucial to achieving high levels of community inclusion and work towards environmental equity.

On Successfully Engaging a Community - Where to go from Here

“It takes time...in order to really create an engagement, you have to build the process. And it takes time. It takes time to build a relationship with people. And I think that’s where we have been successful.”

If you’re interested in community organizing and engagement, it is imperative to take the time to build meaningful relationships with people in the community. Mr. Mundo believes that in order to garner interest and involvement from the community, you must treat everyone with the dignity and respect that all human beings deserve. He also emphasizes that “a strong community is one in which diversity is recognized and celebrated,” and it is extremely important to identify people’s unique traits and amplify the voices of natural leaders in the community; for example, uplifting bilingual voices in the community builds language inclusivity from within.. And if you’re someone who is wanting to contribute to the empowerment of an underserved community, the most important thing you can do is to communicate with leaders in the community; “we don’t need a savior,” Mr. Mundo states. Rather, he encourages outsiders to become empowerers, people who uplift the voices of community leaders and build the capacity for their voices to be heard in decision making.

Anyone who is interested in getting involved in the climate justice movement with the Marin County Multicultural Center can reach out to the organization at http://multiculturalmarin.org/ and Shore Up Marin at https://www.facebook.com/shoreupmarincity/

Jenna Quan is a fourth-year undergraduate student majoring in evolution, ecology, and biodiversity and minoring in education. She has a passion for ecology and biology, especially in marine systems. Upon graduation, she hopes to pursue a PhD in ecology and continue on in academia. When Jenna is not working on research projects at BML or in a genetics lab, she is co-captaining the UC Davis Dance Team and working on her knitting projects!

Finding a mentor in college could be your favorite homework