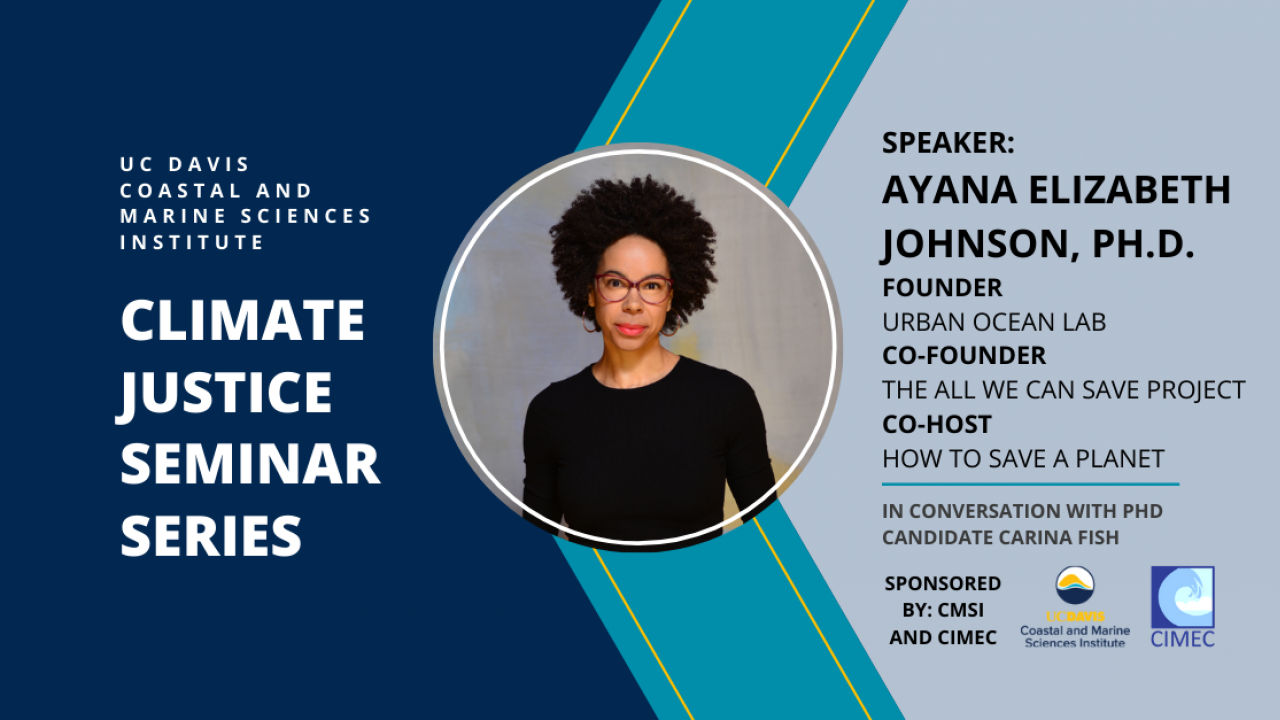 On November 30th, 2020, the UC Davis Coastal and Marine Sciences Institute welcomed Dr. Ayana Elizabeth Johnson as the first speaker in our Climate Justice Seminar Series. Dr. Johnson is among the world’s most influential marine biologists, as well as a policy expert, writer, and advocate for coastal communities. Coinciding with the inaugural Black in Marine Science Week, Dr. Johnson and UC Davis Ph.D. Candidate Carina Fish discussed some of the challenges, impacts, and successes of the climate justice movement, which frames climate change not just as an environmental issue, but as a moral imperative to ensure that the needs of all people- regardless of race, geography, or socioeconomic status- are included in the decisions about and solutions to climate change.

We live in a world where becoming a marine biologist is the quintessential dream job for many kids. Who doesn’t want to work in/on the ocean? To swim with the creatures of the sea, learn about them, and even help protect them from harm? Yet it’s also a field that many members of historically underserved and marginalized communities are discouraged from entering. This “dream job” is a dream that many kids are told is “ridiculous” or out of reach, especially if they grow up in a community where access to coasts and the ocean isn’t readily available. For first-generation students, this heaping helping of dissuasion often comes with a side of pressure to pursue fields that are more traditionally associated with high financial and social benefit.

Bringing the ocean to all communities doesn’t have to be a herculean task, though. It was Dr. Johnson’s realization, upon returning to her home borough of Brooklyn, that although we tend to not equate urban areas with coastal areas, New York, with its 578 miles of coastline, is indeed both urban and coastal. This, and an awareness that 1 in 3 Americans live in a coastal city, was the seed that grew into the Urban Ocean Lab, where policy, justice, her love of Brooklyn, and love of the ocean come together.

On Conservation and Culture

“I think of ocean conservation as an act of cultural preservation”

Some schools of thought focus on diverting economic dependence away from marine resources as a way of adjusting to impacts of climate change, but as Dr. Johnson points out, oceans and coastal communities are so deeply intertwined that a loss of marine and coastal ecosystems isn’t just about the loss of food security or jobs, it’s about the loss of human culture, too. Her example, that “Who wants to live in the Caribbean if we can’t have a fish fry? If grandparents can’t take their grandkids fishing?” is echoed by coastal communities around the world, whose traditions and histories have been built on the availability of marine resources. Time and time again, we see that impacts, such as mercury pollution in fish and water contamination due to large-scale resource extraction or waste dumping not only disproportionally affect the health of lower socioeconomic communities along the coast, but also rob communities of the resources they’ve historically used to survive. Recent attention to the plastic pollution crisis in marine ecosystems brings with it an ever-growing awareness that the growing reliance on/ convenience of single-use plastic combined with NIMBYism leaves many historically marginalized communities and their associated unique ecosystems at high risk of being inundated with plastic waste, impacting food sources, recreation, and tourism. This stark illustration of the ways in which every aspect of life in coastal communities are threatened around the world makes the need for immediate climate justice all the more apparent.

On Success, And Knowing It When We See It

“Moving at the speed of inclusion”

Sometimes we need to move quickly. We need to be reactive. We have to take advantage of a moment when the national spotlight turns to something that matters and understand that it’s a moment that can inspire change. Dr. Johnson gave the example of Hurricane Irma hitting Barbuda in 2017, leaving communities devastated and the island covered in rubble. Although heartbroken for the place she had come to know so well through her work, she also recognized it as a moment where action could be taken and contributions could be made by rallying her network to bring support to the island, and added that in difficult times “when you most need a break is sometimes when you can be the most effective because the news cycles are so short and attention spans are so short.”

Although swift action can be a necessity, Dr. Johnson and Carina also discussed the importance of finding balance in the time it takes to implement change, echoing the proverb that “if you want to go quickly, go alone. If you want to go far, go together.” Often, taking time to build a team, establish trust, and truly collaborate yields the best and longest-lasting results. Showing up, listening, and understanding all go a long way.

It’s important to recognize that monetarily poor communities in developing nations have a long history of being courted by researchers who extract data and resources - often requiring the help of communities to do so - without truly partnering with them,  giving back, and/or abandoning them once the work is done. Sharing data with those affected by it and those who contributed to it, valuing the contribution of those from the community on par with how other research collaborators would be recognized, donating equipment to the community, training local people and helping them attain certifications needed to take part in surveys and other projects, and then hiring them as part of survey teams can all be powerful ways to demonstrate commitment and build trust. Explore more about steps we can take to be responsible researchers in a National Geographic article written by Dr. Johnson, 4 Steps to Improve Ocean Conservation Research in Small Island States.

Once we’ve conducted the research, how do we know if we’ve done it right? Where do we look for stories of success that can model ocean justice for the rest of the world? According to Dr. Johnson, we need to ask ourselves “Is the community into it? … If you bring people along with you. If members of the community can explain it to others. If people invite you back. If people ask you follow-up questions and are really engaged.” Those are hallmarks of good community collaboration in any scientific discipline, and when we find them in our work, it’s a signal that we’re headed in a direction worth following.

On Finding Ways To Make An Impact

“It’s important to remember how joyful this work can be”

Confronting and rectifying the equity divisions in access to coasts and oceans that keep so many voices from being heard in the field of marine biology and ecology, that divert funding and research away from historically underserved communities or actively harms them, and that allow environmental policies and practices to disproportionally and negatively impact those same communities isn’t an easy task, but there are ways to take action. One that Dr. Johnson mentions is:

“…teaching kids to swim. A lot of poor kids, young people of color… they just never learn to swim. In the US, it’s a legacy of segregation, where Black people weren’t allowed in public pools, were prevented from going and swimming at many beaches, and so if that generation doesn’t learn to swim, they can’t teach their kids to swim and they maybe can’t afford swimming lessons or don’t prioritize it. I think that’s a really concrete one. And that has led to Black kids being at a much higher risk of drowning than white kids, because they just don’t have the opportunity to build those skills. That’s something that I think about a lot and is something that probably many people who are tuned in today could help with, and it would be really fun!”

Want to find out more about how to do this in your own community? Find suggestions in this thread from Twitter, started by our Executive Director, Dr. Tawny Mata.

On Where We Go From Here

One of our favorite takeaways from this seminar is that, as we pursue the work of decolonizing and rectifying the many injustices and inequities in who bears the brunt of climate change impacts we have to remember to find and use our unique superpowers, to pursue the tasks where we can be of the most service and support, and, as Dr. Johnson says, we would be wise to  “… remember that because this work is so hard, because it is a lifetime of work, we can also pursue it in a way that is joyful.”

Exploring The Science of Larval Dispersal

The Effects of Stress on Fish: Environmental Physiology