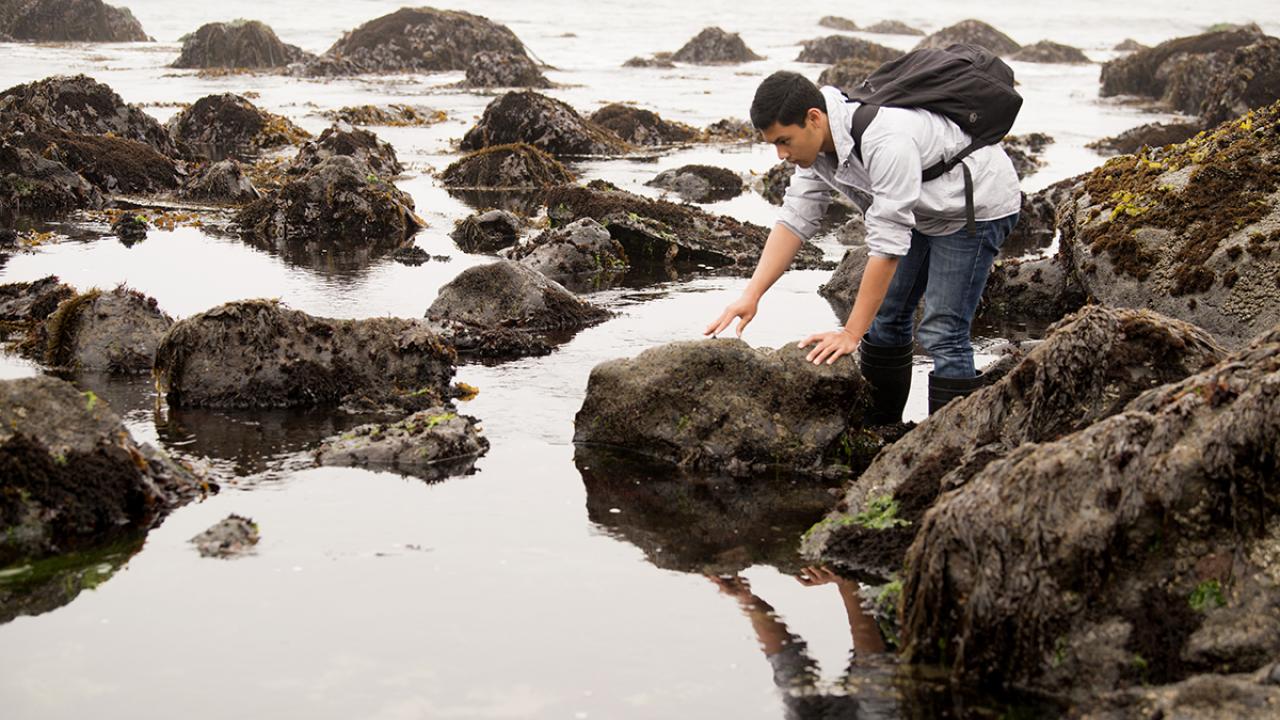 There is a certain warmth that accompanies Lorenzo Ray Olano as he moves through the world. For someone working toward becoming a veterinarian, this ability to lighten a room will undoubtedly transform his practice into something great. But as an animal science major, he didn’t expect he’d find a path that included aquatic animals too.

Flashback to high school, Lorenzo, like many others, was unsure of his future. Originally from the Philippines, he developed relationships with a variety of unusual animals growing up including fishes and snakes. In his bedroom, he tended to his own tanks, and always enjoyed taking care of any animals that came his way. His friends always urged him to pursue his love of animals. It eventually dawned on him that what he thought of as a hobby could manifest itself into a career. In the spring of his senior year of high school, he applied and was accepted to UC Davis’s animal science program.

Lorenzo says he has always enjoyed being busy. So, it wasn’t long before he found himself looking for research opportunities in the animal science department. The lab of Dr. Anne Todgham is one of the only groups in the animal science department to study fish. On a whim, he sent her an email explaining his interest in ichthyology. To his surprise, the door opened and as a freshman, he was exposed to the world of research.

With the help of Dr. Todgham, Lorenzo decided on a series of research questions: Are there inducible stress tolerances in Chinook salmon? Are fish equipped to handle increases in temperature? Can evolution keep up with rising global temperatures? And finally, can fish prime themselves for more than one stressor? Working with another undergrad in the lab, Lorenzo designed an experiment to answer these research questions. Doing so he experienced an array of unexpected challenges including inclusive results. He believes the process of research has taught him to be more resourceful. “Research requires you to finesse your way through challenges and trouble shoot,” he says. “But, I love it.”

For his honors thesis that he will be completing this year, he will ask similar questions about an intertidal species: crabs and their ilk. He explains that these species already experience a lot of variation in their natural environment such as extended periods of heat, hyper-salinity, and air exposure. He wants to know how these stresses are handled by such species and the degree of stress they can tolerate and still remain viable. Lorenzo spent the summer at the UC Davis Bodega Marine Laboratory. To help grow his aquatic knowledge, he took the invertebrate biology class with Professor Eric Sanford. Living on site, Lorenzo was also able to complete an entirely new research project over the course of the six-week program. This time he asked why skeleton shrimp choose to congregate on Bryozoa over other substrates, and exactly what type of relationship was going on between the species? Did the presence of skeleton shrimp inhibit bryozoan feeding patterns? Or would they facilitate water movement? Surprisingly, he found no correlation between skeleton shrimp and bryozoan feeding behavior. The shrimp continue to feed at the same rate outside of the disturbance. “BML is a fantastic experience for students. I am so glad I got to work with Eric and try something new. The community is unlike any other,” Lorenzo adds.

In his final year of undergrad, he’s still working on balancing research, school, and other veterinary internships. “It gets easier,” he says with a laugh. While he has the education and experience now to pursue an advanced degree in aquaculture, Lorenzo believes that a veterinary degree will allow him to get the best of both worlds. Ideally, he’d like to help developing communities utilize aquaculture as a sustainable food source, as well as have his own clinical veterinarian practice. His advice for other students? “Just go for it! Don’t be afraid to reach out to your professors. They know what you’ve been through and they want to help.”