Join us in a celebration of all things seagrass! March 1st is World Seagrass Day, and we're taking an in-depth look at what seagrasses are, how they interact with marine coastal ecosystems, and how they're being impacted by climate change. 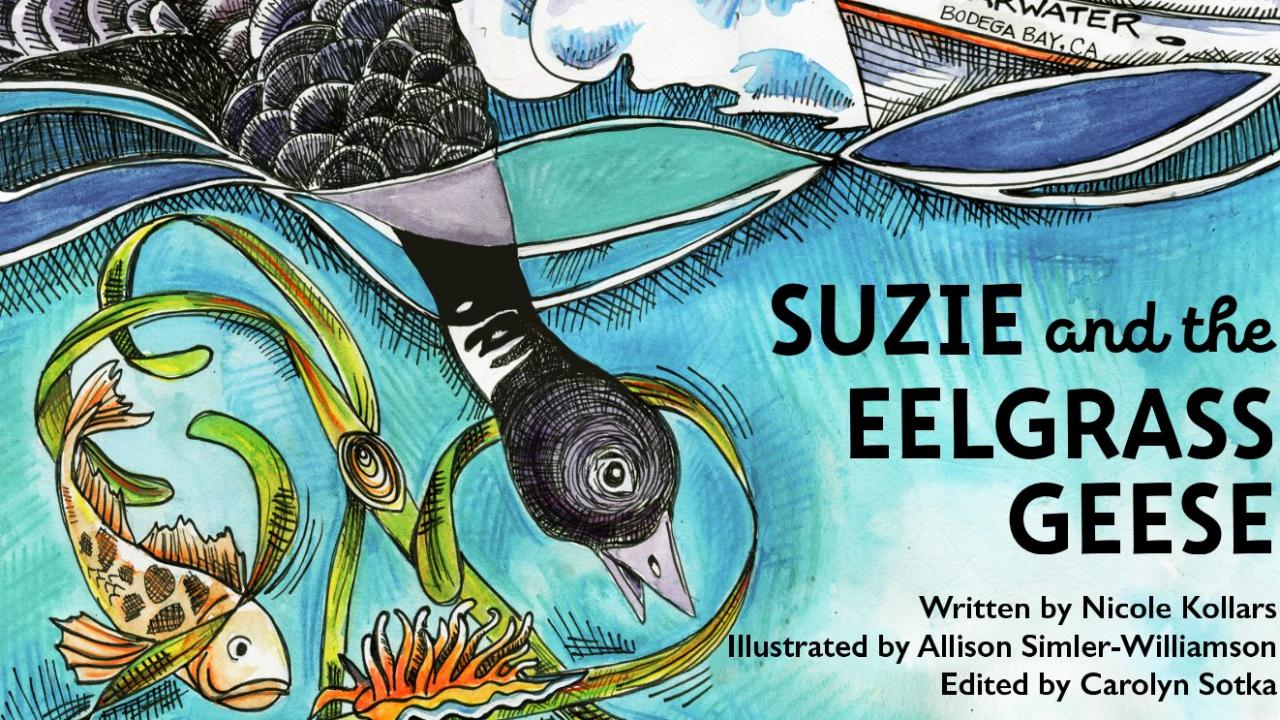 You can join the celebration by entering an original photo of seagrass OR by sharing your favorite seagrass fact in your own words between 9am (PT) on 2/28/2022 and 5pm (PT) on 3/4/2022. Two winners will receive a copy of Suzie and the Eelgrass Geese autographed by the author, BML alumna Nicole Kollars.

Now, meet two UC Davis researchers whose research on seagrass is revolutionizing our understanding of these versatile marine plants:

Dr. Stachowicz is a Professor of Evolution and Ecology at the University of California, Davis

Seagrasses form vast underwater meadows that provide habitat for countless other organisms and directly influence key ecosystem processes like carbon storage and erosion control.  But seagrasses are also under threat from human-caused changes in the environment like warming temperature and cloudy water. Our goal is to understand how genetic diversity within eelgrass, a seagrass found throughout the northern hemisphere, provides resilience to this species and the ecosystems it supports.

When staring out at a field of seagrass, it may at first seem unremarkable... a homogenous sea of green leaves swaying with the waves. But that superficial sameness masks the presence of an amazing genetic diversity that is the key to eelgrass success. We first stumbled into this idea one winter when a flock of migratory brant geese devoured seagrass we had planted and carefully tended over the course of months. Our initial dismay turned to excitement as we noticed that plots that we had initially planted with many genetically distinct plants (called genotypes) regrew and recovered faster than those with few genotypes, a finding we confirmed with later experiments.

What caused this effect? Just as animals within a species can differ in many important ways (think about differences among humans, for example), superficially similar eelgrass genotypes differ in how they use light, nutrients, resist disease, invest in storage, and countless other traits. It is this diversity of eelgrass assemblages that made them successful at recovering from injury. We subsequently found that eelgrass beds just a few miles apart have very genotypes with traits that match the local environment. We have found, for example, that eelgrass is well-adapted to differences in temperature than span as much as 10 degrees along the length of Tomales Bay, and this is due to genetic differences in the eelgrass. So there are already eelgrass populations in Northern California capable of tolerating temperatures currently found in San Diego, providing the genetic potential for eelgrass to adapt to a warmer climate.

We are currently working to understand the genetic basis of these differences and to test whether seagrass restoration strategies that draw from locally adapted populations or a mix of many populations offer better prospects for long-term success. While the importance of maintaining biodiversity is broadly understood for places like coral reefs and rain forests, this work reminds us that hidden biodiversity, even within a single species, is critical to maintaining coastal ecosystems in the face of a changing environment.

Why is your research important?

My research aims to advance knowledge of the ecological functioning of marine coastal ecosystems and how they benefit human societies in different ways.

I study the impacts of global change in marine macrophytes, particularly seagrass meadows and kelp forests, and also the way these natural ecosystems can help mitigate and adapt to climate change.

What do you want to achieve with your research? What are the possible real-world applications?

I would like to contribute to putting more attention to natural-based solutions to problems we (humans) have created (i.e. climate change, pollution, among others). Most of my research studies the carbon sequestration capacity of seagrasses and kelp, and how this reduces CO2 atmospheric concentrations and also alleviates acidification of seawater. Direct application of my research has two pathways: conservation and management by providing knowledge to policymakers and other actors during the decision-making, and it also has implications for more sustainable aquaculture activities.

Most of my favorite moments about my work are related to fieldwork experiences. One of my favorite memories working with seagrass goes back to when I was doing research in inshore seagrass meadows off the Great Barrier Reef in Australia. We were there for many days doing research from small boats and also diving. We spotted a lot of fish and many different invertebrate taxa, but also turtles, crocodiles, sharks, and dugongs (a cousin of manatees). It is incredible the amount of biodiversity that can be found in seagrasses. The fun - but unglamorous - fact is that we were collecting dugong's floating poop for days, as it can disperse seagrass seeds!

Find more articles about seagrasses on our blog:

Seagrasses Turn Back the Clock on Ocean Acidification

From Plant to Powder: An Eelgrass Odyssey