Ecological and Physiological Impacts of Salinization of Aquatic Systems

View recordings from this event 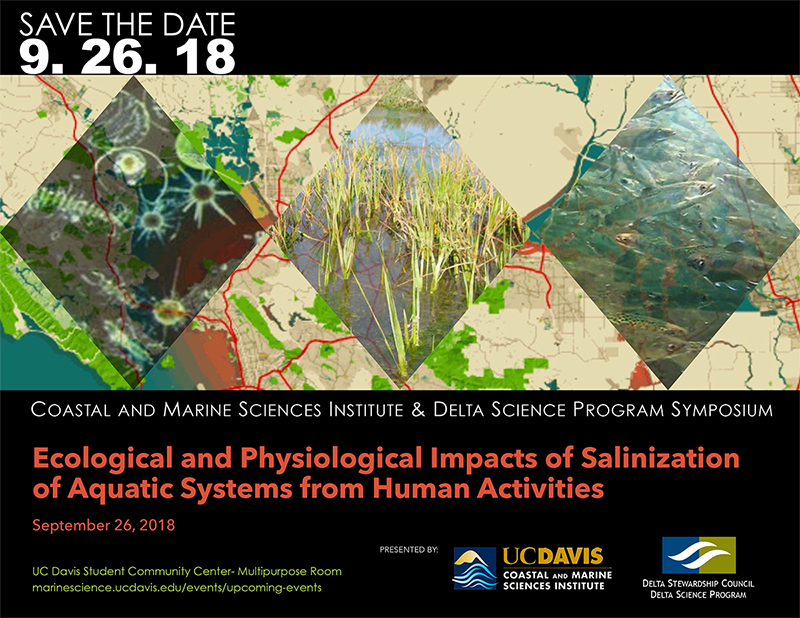 The salinization of lakes and rivers due to agricultural activities (e.g. irrigation run-off) and road salting are increasingly being recognized as an emerging environmental problem. At the same time, the rise of sea levels is expected to impact estuarine habitats and push the seawater-freshwater interface further inland. Thus, many estuarine systems are expected to be “squeezed” by the dual impacts of increasing salinity from coastal and inland inputs. This type of salinization is of particular concern in the San Francisco Bay-Delta ecosystem, which lies at the interface of coastal, agricultural, and urban influences.

This symposium will shine light on the impending salinization of delta and estuarine systems as an under-appreciated component of global climate change. Globally, the interface of freshwater and coastal ecosystems are critically important environments for biodiversity, as they provide habitat for many species of concern. This is particularly relevant to the Bay-Delta system, where a network of tidal wetlands and freshwater rivers are at risk of increased salinization. This symposium will bring together leading environmental physiologists, evolutionary biologists, and ecosystem modelers interested in the capacity for delta/estuarine organisms to cope with salinity; the meeting would provide an opportunity to interface with researchers and managers focused on the Bay-Delta region from Sacramento to San Francisco. The goals of the symposium will be to share ideas on the physiological, ecological, and evolutionary mechanisms of salinity adaptation and how such information can be used to forecast biological impacts and better manage the Bay-Delta ecosystem in the face of sea level rise and other anthropogenic influences.

9:10-9:30        John Largier- Overview of salinity intrusion and drivers of salinization in estuaries

9:50-10:10       Deanna Sereno- Past changes in salinity in the San Francisco Bay Delta in response to changing environments and management strategies

12:25               LUNCH BREAK (ON YOUR OWN)  Nearby dining venues on campus include CoHo South Cafe located on the first floor of the Student Community Center and restaurants at the Silo (Gunrock Pub, Crepe Bistro, Spokes Grill, and Peet’s Coffee) and food trucks @ the Silo.

1:55-2:20        Steve McCormick- The hormonal control of osmoregulation in fish and implications for understanding the impacts of salinization

Speakers, bios and talk titles will be added here as they become available.

Bio:  James (Jim) Cloern is a senior research scientist at the U.S. Geological Survey in Menlo Park, California. His research addresses comparative ecology and biogeochemistry of estuaries to understand how they respond as ecosystems to climatic-hydrologic variability and human disturbance. He leads a team investigation of San Francisco Bay that has included study of primary production, nutrient cycling, algal and zooplankton community dynamics, ecosystem metabolism and food web dynamics, disturbance by introduced species, ecosystem restoration, and projected responses to climate change.

Bio:  João Miguel Dias is Professor and Director of the Physics Department of University of Aveiro. He founded and leads the Estuarine and Coastal Modeling Division at the Centre for Environmental and Marine Studies, where co-coordinates the Integrated Environmental Systems thematic line. His main field of expertise is physical oceanography, with special emphasis on the numerical modelling of estuarine and coastal zones, namely on the Aveiro lagoon hydrodynamics. He published a significant number of scientific papers about these subjects, has coordinated/participated in several research projects and integrated projects/grants evaluation panels for several national and international agencies.

Bio:  Ted Grosholz is a professor and Swantz Chair in Cooperative Extension at UC Davis. His research program broadly addresses ecology, conservation and restoration of marine and estuarine systems. His approach involves field and laboratory experiments to address what determines the abundance and diversity of species in coastal systems. He is particularly interested in how human impacts such as sea level rise and estuarine acidification have shaped community and ecosystem processes.

Edward Gross is an Associate Research Engineer at UC Davis and Principal at Resource Management Associates. He develops and applies numerical models to study estuarine hydrodynamics and transport processes and the effect of these processes on the ecosystem. Recent work in the San Francisco Estuary includes predicting the distribution of zooplankton and fish due to the combined effect of hydrodynamics and swimming behaviors and predicting salinity distribution in the pre-development estuary.

Bio:  John Largier addresses how moving water connects ecosystems and people in the coastal ocean, with a focus on west-coast bays, estuaries and coastal waters, comparing California with other places characterized by coastal upwelling and seasonal rainfall (e.g., Chile, Spain, Portugal, Mexico, South Africa).  After graduate studies in South Africa, he joined Scripps Institution of Oceanography (UC San Diego) in 1988 and joined UC Davis in 2004 as Professor of Coastal Oceanography, based at the Bodega Marine Laboratory.

Talk Title:  Overview of salinity intrusion and drivers of salinization in estuaries

Bio:  Stephen McCormick is a senior scientist with the US Geological Survey and an adjunct professor at the University of Massachusetts, Amherst.  Steve has worked at the Conte Anadromous Fish Research Center in Turners Falls MA for 28 years.  His research focuses on how environmental factors such as salinity, temperature, contaminants and other stressors impact the physiology of migratory and euryhaline fishes.  The goal of this research is to provide natural resource managers with ideas and information for the conservation, enhancement or restoration of these important and often imperiled species.

Talk Title:  The hormonal control of osmoregulation in fish and implications for understanding the impacts of salinization.

Brief summary: I will present information on how changes in environmental salinity are detected, transformed into signals (especially hormonal signals) and producing a physiological response that allows for ion and water homeostasis and fitness in a new environment.  I will provide examples of differing strategies of preparation for and response to salinity in anadromous and estuarine species, and how these might influence who will ‘win’ and ‘lose’ under increased salinization.

Bio:  Ted Sommer received his Ph.D. from University of California at Davis, where he studied under noted fisheries biologist Dr. Peter Moyle.  Dr. Sommer is the Lead Scientist for the California Department of Water Resources, where he helps guide the department's aquatic science efforts, particularly for the San Francisco estuary and its tributaries. He is a leading researcher on native fishes, with studies on salmon biology, pelagic fishes, floodplain ecology, food webs, and hydrology.  Since 2001 Dr. Sommer has published more than 50 research articles in peer-reviewed scientific publications.

Bio:  Jonathan Velotta is an evolutionary biologist interested in the mechanisms of adaptation to extreme environments. By merging physiology with functional genomics and population genetics, Jon aims to gain an integrative understanding of adaptation from two unique model systems: mice that live at extreme elevations, and fish that have invaded freshwater from the sea. Jon is currently a National Institutes of Health postdoctoral fellow studying under the advisement of Zac Cheviron at the University of Montana, where he resides, and Graham Scott at McMaster University in Canada.

Bio:  Research in the Whitehead lab uses genomics tools to understand how organisms integrate cues from, respond to, and are shaped by the external environment. We examine genomic responses to stress that occur over physiological and evolutionary timescales. Many complementary approaches are integrated into our program, including genome expression profiling, population genetics/genomics and phylogenetics, and physiology, to study how individuals and species respond to and adapt to environmental stress. Stressors of interest include those that are natural (temperature, salinity) or of human origin (pollutants, climate change).  We integrate basic and applied science to diagnose and solve environmental problems.