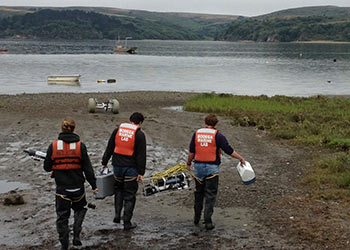 About 30% of the carbon dioxide added to the atmosphere by human activities has been absorbed by the oceans, driving declines in seawater pH, a phenomenon known as ocean acidification. Ocean acidification may pose a particular threat to shellfish, corals, and similar organisms with calcareous skeletons that are vulnerable to dissolution in acidified waters. In 2008, co-PIs Brian Gaylord (BML/EVE), Tessa Hill (BML/Geology), Ann Russell (Geology), and Eric Sanford (BML/EVE) established the Bodega Ocean Acidification Research (BOAR) program at BML. BOAR is an interdisciplinary research program primarily funded by the NSF and focuses on how changing seawater chemistry impacts ecologically and economically important coastal species in California. BOAR scientists are also members of a broader team of marine researchers collaborating to study ocean acidification along the west coast of the U.S, via an NSF consortium called the Ocean Margin Ecosystems Group for Acidification Studies (OMEGAS). In the past 5 years, these programs have been supported by over $6.2 million in grants ($2.3 million to UC Davis/BOAR), including primary support from the NSF as well as the UC Multi-campus Research Programs and Initiatives (MRPI).

The BOAR program has used a three-pronged approach to study the emerging problem of ocean acidification, including (1) deployment of oceanographic instruments to monitor spatial and temporal changes in seawater chemistry, (2) laboratory culturing experiments to determine impacts of ocean acidification on the early life stages of key coastal species, and (3) field experiments to evaluate potential consequences in the real world. 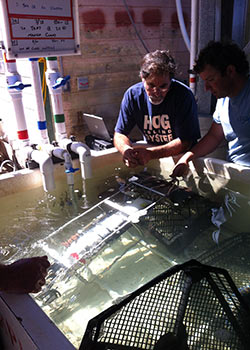 The ocean monitoring component of BOAR uses shipboard, moored, and onshore instruments to record variation in pH and other environmental conditions. BOAR has also established a partnership with oyster growers and maintains pH instruments at the Hog Island Oyster Company in Tomales Bay. Collectively, these monitoring efforts reveal that episodes of low pH events already occur routinely along the northern California coast. This finding supports growing concern that global trends in ocean acidification may be amplified in coastal upwelling ecosystems, such as the region where BML is centered.

A cornerstone of the BOAR program has been the design, construction, and operation of two sophisticated systems at BML to culture the early life stages of ecologically and economically important species under controlled carbon dioxide and temperature levels. These experiments have examined the effects of acidified waters on the larvae of native oysters, mussels, sea urchins, and other species. This work suggests that ocean acidification poses a particular threat to the early life stages of shellfish (oysters and mussels), and has led to high-profile publications in Proceedings of the National Academy of Sciences, Ecology, Global Change Biology, Journal of Experimental Biology, and other top journals.

A novel component of the BOAR program has been the use of complementary field studies to evaluate the effects of changes in ocean chemistry on species under realistic conditions in the field. This approach is exemplified by BOAR studies of juvenile oysters outplanted to Tomales Bay, and studies of mussel growth replicated along the coasts of California and Oregon.

The BOAR program includes a large training and outreach component. To date, BOAR has trained 8 graduate students, 3 post-doctoral scientists, and 6 research technicians (mostly post-baccalaureate students from UC Davis) working on ocean acidification projects. With support from the UC MRPI program, BOAR trainees also benefit from interactions with colleagues working on ocean acidification at UC Santa Barbara and Scripps Institution of Oceanography (UC San Diego). BOAR scientists are members of the California Current Acidification Network (C-CAN), a partnership among academic scientists, policymakers, and the aquaculture industry for coordinated monitoring and outreach. BOAR scientists have been very active in communicating their findings to the public via a variety of interviews and news stories (TV, radio, print) that are archived on the BML website. 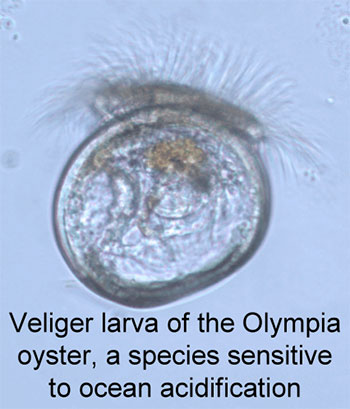 Led by the research groups of Brian Gaylord, Tessa Hill, Ann Russell, and Eric Sanford, the Bodega Ocean Acidification Research (BOAR) consortium examines spatial and temporal changes in seawater chemistry and the impacts of this variability on the ecology, physiology, and biomechanics of critical nearshore marine invertebrates. Documented, ongoing declines in pH and carbonate saturation state are thought to pose a particular threat to organisms that synthesize calcium carbonate shells and skeletons, which are vulnerable to dissolution in acidified waters.

We are using a three-pronged approach to address this issue, including 1) modern ocean monitoring and past ocean reconstructions to quantify changes in seawater properties over multiple timescales, 2) laboratory experiments to determine impacts on larval, juvenile, and adult stages, and 3) field outplants to evaluate potential consequences accruing in the real world. In conducting this work, we are exploiting the fact that our group is centered at Bodega Marine Laboratory (BML) within one of the most intense upwelling centers in the world. Waters rising from depth at our location bathe organisms in seawater characterized by geochemical signatures (low pH and reduced carbonate saturation state) resembling those expected over global scales decades in the future.

Our research is also facilitated by a suite of laboratory and field instrumentation available for the study of ocean acidification: 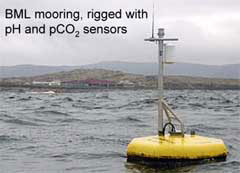 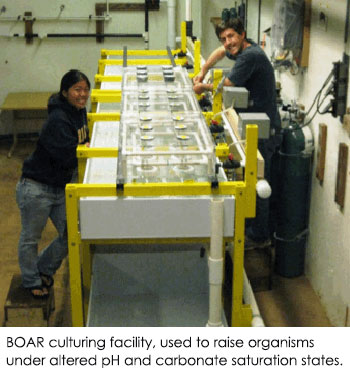 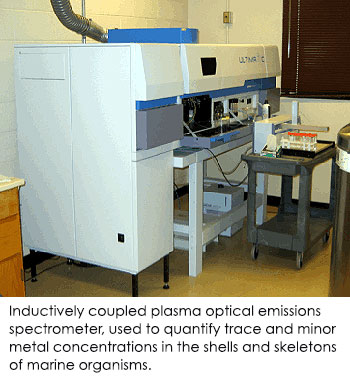 The Trace Elemental Analytical Facility, consisting of an Inductively Coupled Plasma Optical Emissions Spectrometer (ICP-OES) allows for quantification of minor and trace metals in the shells and skeletons of marine organisms. These metals form part of a suite of geochemical proxies used to develop records of past seawater temperature change in local waters from material contained in sediment cores. We also have regular access to Isotope Ratio Mass Spectrometers (IRMS) and ICP-MS instruments (Agilent Quad and Thermo Scientific Element 2), for analysis of stable isotopes and metals in seawater and hard parts of marine organisms. These metals include uranium, a promising tracer of changes in seawater pH through time. 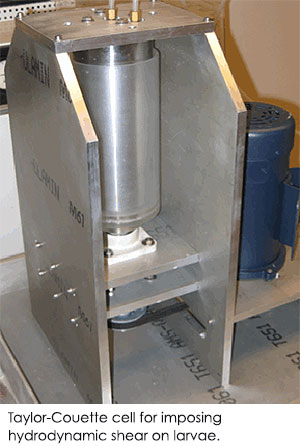 Research efforts to date have focused primarily on two coastal “foundation species” - species that play disproportionately important roles in communities by providing crucial habitat, or by maintaining essential ecosystem traits. Ostrea lurida, the Olympia oyster, is native to California estuaries and can exert a strong influence on water quality through its filtering activities. The California mussel, Mytilus californianus, is not only a competitive dominant on exposed rocky shores, but also provides habitat for a vast array of fauna that live in the interstices of its beds. We are working to dissect ecological impacts of ocean acidification on several additional taxa of interest as well. A Taylor-Couette cell provides a means of assessing the strengths of the calcium carbonate shells and skeletons of marine larvae exposed to acidified seawater. Although direct testing of larval structures is difficult due to their tiny dimensions, the mechanical integrity of these structures can be examined by imposing known intensities of hydrodynamic shear stress. For larger (e.g., adult) shells, we employ an Instron materials testing device to quantify the strength of calcified structures.

BOAR in the News