Scientists at BML are engaged in researching many other aspects of climate change, which can be grouped broadly into oceanographic and ecological studies as well as in the context of habitat restoration and invasive species. 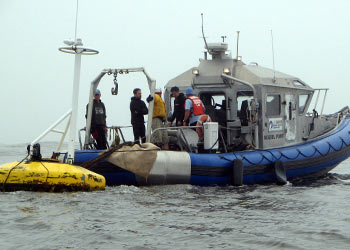 Tessa Hill's Lab uses paleoceanographic and geochemical records to study the forcing mechanisms and feedbacks of the Earth’s climate during the past 1 million years. This research uses stable isotopes, trace elements, and other proxies in sediment cores collected from the ocean floor to reconstruct past changes in ocean temperature. In addition, the Hill Lab has measured stable isotopes in long-lived deepwater corals to reconstruct more recent changes in ocean temperature and nutrients over the past several hundred years. Additional studies focus on samples of microfossils from sediment cores to understand how rapid climate change has altered biological assemblages of invertebrates in the past.

John Largier has been leading the development of the Bodega Ocean Observing Node (BOON) – a regional effort to monitor, index, and understand the ocean environment in the vicinity of Bodega Bay (i.e., between San Francisco Bay and Point Arena).  BOON delivers real-time data and analyses on currents, temperature, salinity, chlorophyll, turbidity, and wind that are used by a variety of researchers, mariners, ocean users, and environmentalists.  This is part of a regional association (CeNCOOS) and data are increasingly used to better understand and manage environmental resources (e.g., in design of marine protected areas) and environmental quality (e.g., in mapping regional impact of San Francisco Bay outflow). John Largier and graduate student Marisol García-Reyes studied historical wind and sea surface temperature data to document modern changes in wind-driven upwelling that have occurred along the California coast during the past 3 decades. Largier also served as the chair of the scientific advisory council that authored a 2010 report regarding climate change impacts on marine ecosystems in northern California (prepared for the Gulf of the Farallones and Cordell Bank National Marine Sanctuaries).