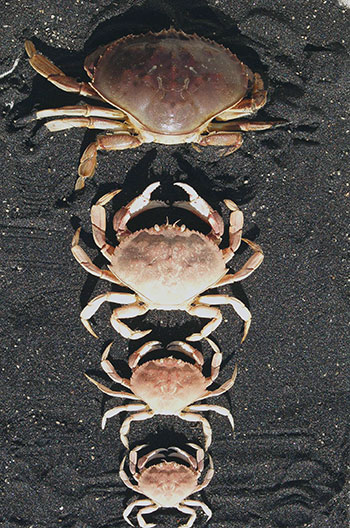 Ernie Chang's Laboratory has worked on the characterization of the crustacean hyperglycemic hormone (CHH). As the name indicates, this neuropeptide hormone regulates blood glucose. This hormone is a member of a novel arthropod-specific neurohormonal family. Members of this peptide family control a number of important physiological processes. The Chang laboratory developed a sensitive ELISA to quantify the hormone and have examined expression of the CHH gene. With these molecular tools, they have examined alterations in the circulating levels of this hormone in lobsters during various environmental stresses, including season of capture, method of live storage, depth of capture, hauling rate, and infectious diseases. These various collaborative studies involved colleagues from the Univ. of Maine, Univ. of Montpellier (France), Univ. of Denmark, Univ. of Birmingham (U.K.), and Mahidol Univ. (Thailand).

The crustacean molting gland is normally inhibited by a peptide hormone called the molt-inhibiting hormone (MIH). It is related to CHH. The Chang Laboratory has conducted a number of studies aimed at elucidating the mode of action of MIH upon the molting gland. In collaboration with Dr. Don Mykles (Colorado State Univ.), they have hypothesized that cyclic nucleotides are involved in the signal transduction of MIH regulation of the molting gland. The Chang laboratory cloned a peptide with both MIH and CHH activity in the land crab and characterized its action on circulating glucose and production of the steroid molting hormone. This provided them with a necessary tool for our subsequent studies on the regulation of the molting gland.

The Mykles and Chang laboratories have also cloned nitric oxide synthase and three guanylyl cyclases and characterized their expression in various crab tissues. The expression of these regulatory enzymes, which are involved in the synthesis of cGMP, are altered with varying amounts of circulating ecdysteroids (molting hormones). This observation is consistent with the role of cGMP as a second messenger for MIH. This project is supported by the National Science Foundation.

Claw muscle in crabs undergoes atrophy in response to elevated levels of molting hormones (ecdysteroids) while thoracic muscle undergoes atrophy in response to unweighting (deliberate loss of limbs, leaving the thoracic muscles intact). The signaling pathways that regulate muscle atrophy in crustaceans are largely unknown. Myostatin (Mstn) is a negative regulator of muscle growth in mammals, and the Mykles and Chang laboratories characterized a Mstn-like cDNA that is expressed in muscle of the land crab.

They also cloned a cDNA encoding a Mstn-like gene from the lobster, Homarus americanus. Sequence analysis and three-dimensional modeling of the lobster Mstn protein predicted a high degree of conservation with vertebrate and other invertebrate myostatins. Quantitative polymerase chain reaction (PCR) demonstrated ubiquitous expression of the transcript in all tissues, including skeletal muscles. Quantitative PCR analysis was used to determine the effects of natural molting and eyestalk ablation on lobster Mstn expression in the claw and abdominal muscles. Their data indicate that the transcription of lobster Mstn is differentially regulated during the natural molt cycle and it is an important regulator of protein turnover in molt-induced muscle atrophy.

These data are of interest for basic studies of crustacean physiology, but also for their potential biomedical applications. For example, their studies could provide insight into degenerative diseases such as muscular dystrophy, which involves abnormal degeneration of skeletal muscle. Also, studies on crustacean muscle growth are of interest to the aquaculture and fisheries industries. These studies were also conducted in collaboration with Dr. Don Mykles (Colorado State Univ.)