Changing climates inevitably raise the pervasive ecological and evolutionary question of whether populations are capable of persisting, either through dispersal, plasticity, or shifts in the genetic composition of populations. Bodega Marine Laboratory’s strategic location at the center of many ranges of intertidal invertebrates, along with its superb culturing facilities and access to rocky shores, makes it an ideal place to test hypotheses about the responses of marine organisms to changing climates. 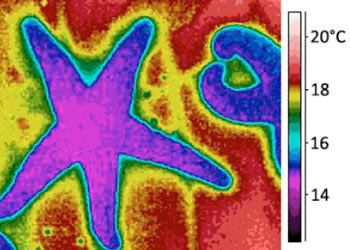 Eric Sanford's Lab studies the potential for temperature change to influence marine communities through geographic range shifts and altered species interactions. Recent experiments document how temperature stress influences the interaction between a keystone predator (the Ochre Sea Star) and its mussel prey. The Sanford Lab has also been studying the hotly debated question of whether evolutionary change (adaptation) might buffer natural populations against the threats of climate change. In particular, laboratory selection experiments have tested whether populations of tidepool crustaceans and sea urchins harbor sufficient genetic variation to adapt to environmental change.

Ph.D. student Morgan Kelly (collaborating with Eric Sanford and Rick Grosberg) examined the impacts of thermal stress on population persistence and range limits in the high intertidal copepod Tigriopus californicus. Despite extremely limited dispersal potential, T. californicus ranges from Baja California northward through the Aleutian Islands. In a series of selection experiments that included populations spanning much of the core of T. californicus’ range, we showed that thermal maxima differed widely from population-to-population and that all populations had a limited capacity to respond to selection for increased thermal tolerance (Kelly et al. 2011). Indeed, most populations were already at, or near, their thermal maxima, suggesting that increasing temperatures could drive many populations to extinction, especially given the limited gene flow that characterizes this species. This work garnered substantial media attention and was featured on both NPR and ABC television.

These limits may be driven by a lack of additive genetic variance, or costs of increased tolerance, manifest in fitness trade-offs with other traits. In Kelly et al. (2013), we aimed to distinguish between the variance and trade-off hypotheses and showed that selection for increased thermal tolerance across 6 populations of Tigriopus actually produced a small positive effect on five fitness-related traits, rather than the expected negative responses. The effects of selection on correlated traits also differed by population, indicating that the genetic basis of thermal adaptation varies across populations. Taken together, these results suggest that the limited capacity to respond to climate change in Tigriopus, and perhaps many other species with limited gene flow, reflects a paucity of genetic variation, and not genetically based fitness trade-offs. 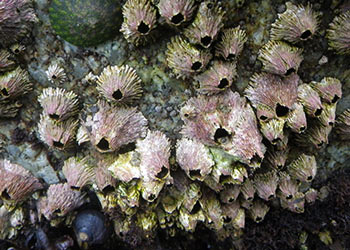 Unlike Tigriopus, the pink volcano barnacle Tetraclita rubescens, appears to be expanding its range northward as seawater temperatures increase. Is this expansion due to a shifting climate envelope or adaptation at the northern range limit?  Mike Dawson (UC Merced), Eric Sanford (BML), and Rick Grosberg (UC Davis-BML) completed a comprehensive analysis of range-wide genetic structure in the volcano barnacle Tetraclita rubescens, which has expanded its range nearly 200 kms northward in the last 2-30 years (Dawson et al. 2010). Nuclear and mitochondrial data both show that T. rubescens is panmictic throughout its range spanning >2000 kms of coast, and that there is abundant variation in all populations, even the most recently established ones. We concluded that genetic swamping by locally maladaptive alleles has limited the capacity of T. rubescens to respond to novel selection pressures at its range boundary and that the ongoing range expansion is likely due to changes in the latitudinal thermal gradient

A variety of other recent projects at BML have sought to understand how climate change is influencing marine communities. For example, Susan Williams and graduate student Cascade Sorte combined field and laboratory studies to demonstrate that increasing ocean temperatures favor invasive invertebrate species in Bodega Harbor. Steven Morgan's Lab has been using natural communities on rocky intertidal boulders as a model system to investigate how variation in temperature influences species interactions and distributions.