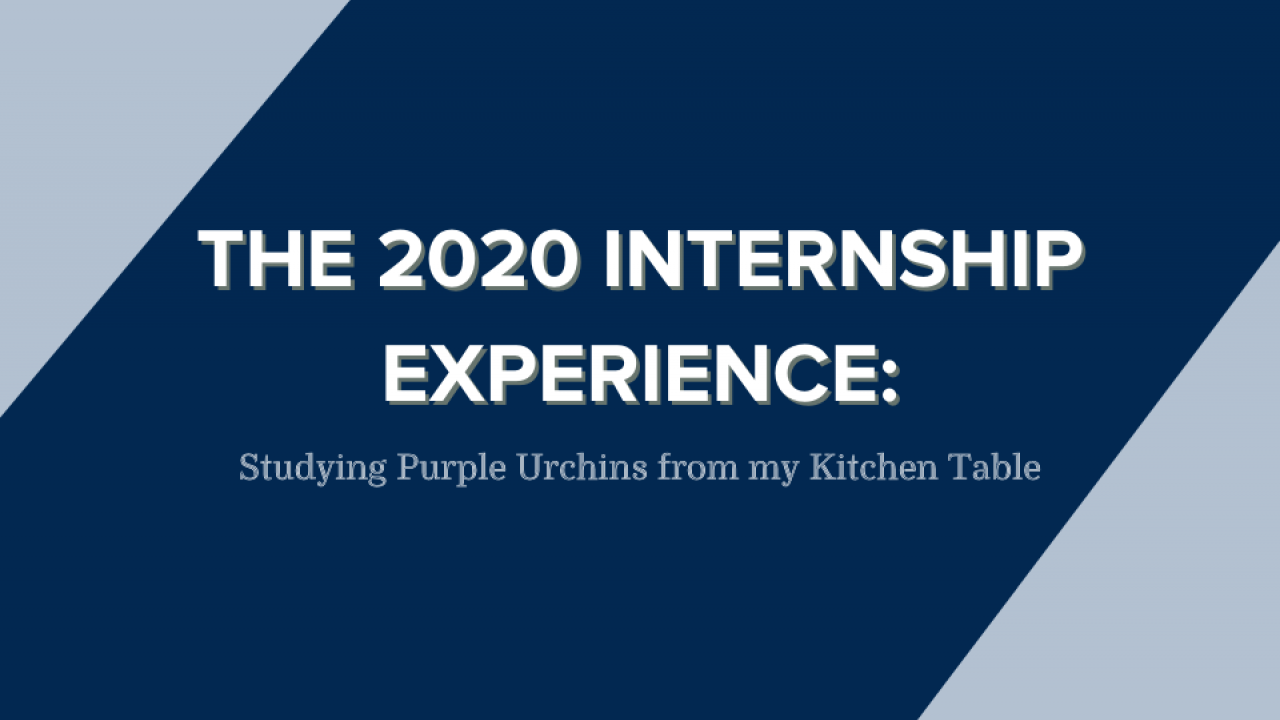 The 2020 internship experience: studying purple urchins from my kitchen table

Kelp forests are integral to marine ecosystems along our coast because they provide habitat and food for numerous species. The Pacific Purple Sea Urchin, Strongylocentrotus purpuratus, will mow down the kelp forests if their populations are not controlled. In northern California, the sunflower sea star, Pycnopodia helianthoides, is a major predator of urchins. The sunflower sea star plays an essential role in maintaining the harmonious balance between the kelp forests and the urchins who walk among them. Sea star populations rapidly declined due to sea star wasting disease, which is now recognized as one of the largest die-offs of wild marine species. I recall noticing the effects of the disease during childhood when I would tag along with my dad to go crabbing. We would reel in crab pots to find sea stars that appeared to be dissolving before our eyes. As a child, I was dumbfounded by these melting sea stars. It wasn’t until my biology classes in college that I learned what was actually happening to them. As sea stars have continued disappearing, urchins have had more freedom to dominate large areas of the ocean floor. Hungry urchins have extensively reduced the kelp forests along the California coast. What remains after the decimation of a kelp forest is a barren wasteland, which cannot support the rich marine life who once lived there.

Over the summer, I had the pleasure of working with Kristen Elsmore, a PhD candidate at UC Davis and a first-time mentor with the Santa Rosa Junior College-Bodega Marine Lab Internship Program. The aim of our research was to gain insights regarding developmental differences between purple urchins in areas where kelp was abundant vs. areas where kelp was scarce (a.k.a. “urchin barrens”). To do so we measured the jaws of the urchins and compared them based on their origin, kelp forest or urchin barren. The comparisons were made to determine if urchins, like many other organisms, allocate their nutrients in a particular manner to maximize their fitness as environmental conditions shift. If we had observed that the urchins had larger jaws in areas where food was scarce and smaller jaws in areas where food was abundant, it would suggest that an adaptive response had been stimulated by the limited food availability. Organisms usually follow a developmental pattern that is shaped by their environment. With that in mind, urchins would presumably respond to food scarcity by allocating nutrients to their jaw development to increase their ability to collect food.

I went into this project thinking that we would find evidence for a plastic response, a shift in resource allocation, in the purple urchins. I was humbled when I analyzed the data and found that there was incredibly high similarity between urchins from kelp forests and those from urchin barrens. Based upon the analysis, we would infer that the relationship between urchins sizes, tooth lengths and tooth weights is the same across all habitat types. There were little to no differences between the sizes of urchins in kelp forests and those in barrens. Although this isn’t the most exciting news to report, it is valuable information for those who will study urchin development in the future. The results didn’t turn out as we had expected, but that’s SCIENCE!

The 2020 BML summer internship experience was vastly different from the previous years due to the occurrence of COVID-19, which meant we were required to do everything virtually. Field work was eliminated completely. We were tasked with navigating a new style of research that relies on computer skills, which might become increasingly common in the future. Instead of taking measurements by hand, I learned how to use image processing programs that allowed me to take measurements virtually. I also got familiar with using a coding language to create meaningful graphs and diagrams from our data. Had this internship not been virtual, I might not have shifted my focus towards these technical skills. I tend to gravitate towards a more hands-on style of work, but I'm grateful that the circumstances guided me to pursue a new set of skills.

Although we weren’t able to meet in person, there was a profound show of support from the Bodega Marine Lab coordinators and mentors. They managed to create a unified atmosphere despite our separation. I was pleasantly surprised by their ability to balance professionalism and altruism. Thank you to all of the esteemed individuals who made this experience possible. I would like to give a special thanks to my mentor, Kristen Elsmore, for showing nothing but patience and support as I navigated my way through this virtual internship.

Biography: Kelsi Hope plans to transfer to UC Santa Barbara in 2021 to pursue a degree in marine biology. Over the summer, she worked with Kristen Elsmore, a PhD candidate from the Gaylord Lab at BML.