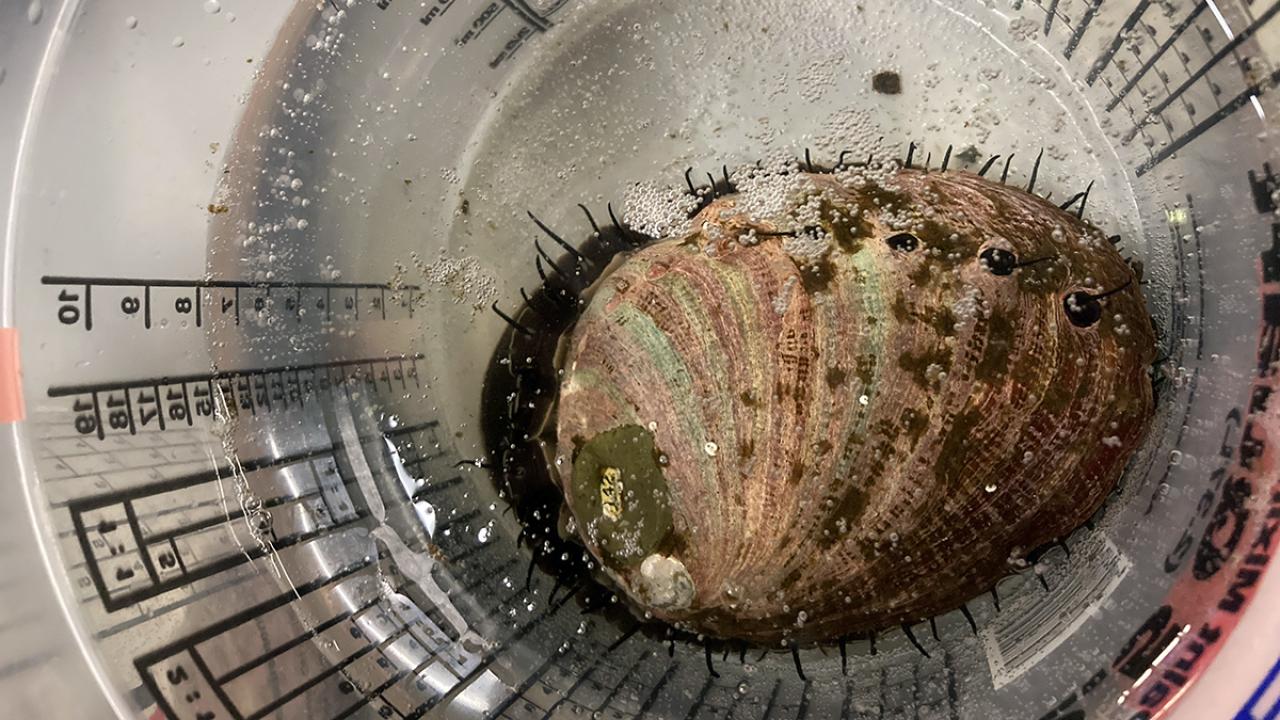 In Acidic Oceans, Lineage and Experience May be the Key to Red Abalone Survival

The flashlight illuminates tens of thousands of swirling, floating specks, each no bigger than a breadcrumb. Raising my voice to be heard over the low roar of machinery in the wet lab, I ask Dr. Dan Swezey, a project scientist here at the Bodega Marine Laboratory and Isabelle Neylan, a graduate student in the Population Biology program (advised by Jay Stachowicz and Andy Sih), how old these minute red abalone are. They tell me that they are only six days old, and that they just might hold the key to a better understanding of what ocean acidification means for the future of their species.

Isabelle explains that she is particularly interested in transgenerational plasticity, which explores how the stressors that a parent experiences influences their offspring when offspring experience that same stress later in their life. In this particular project, Dan and Isabelle are investigating red abalone and ocean acidification. It’s April 8th, 2021, and just a few days ago Dan, Isabelle, and a team of helpers worked to spawn the sesame-seed-sized larvae that would help them answer questions about how ocean acidification will impact red abalone from generation to generation.

Now, I had the opportunity to ask them about the process and the long term implications of their work:

Q: Can you tell us a little bit about the process of spawning red abalone?

Daniel Swezey: It was a huge and collaborative team effort. So, we’ve been raising abalone we first created five years ago here at the marine lab for, well, five years. Then, last week we got a big team of people together to spawn our 5 year olds all at once. We’re talking 150 animals. That is a really big experiment for abalone, trying to spawn that many animals all at once. And the reason we tried to spawn so many is because we were very interested in specific parents that responded (to ocean acidification) a certain way when they were babies 5 years ago. The goal was making specific offspring from those specific moms and dads to see if they respond the same way in the next generation. And we were really successful. 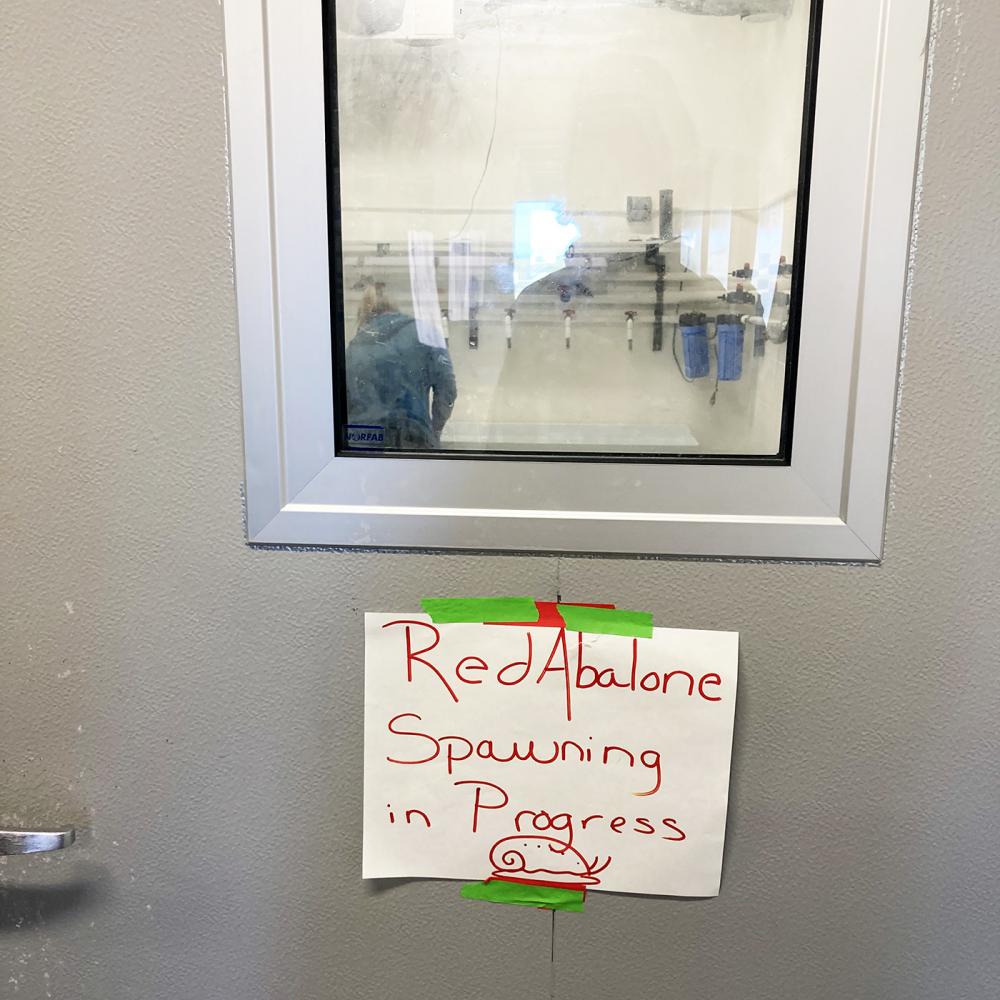 It’s pretty much the best red abalone spawn we’ve had in five years, so a lot of parents reproduced and we had a good and organized team of 15 to 20 people all together.  We were able to quickly collect sperm, collect eggs, make those crosses really fast, and still keep track of everything. We ended up making 82 different pairs of specific moms and dads, which is a lot. And those that made it, and developed properly were then put in our ocean acidification system in the wet lab, and now they’re six days old.

Q: What are they doing now that they’re six days old?

Daniel Swezey: They’re swimming still, so they’re larvae. Abalone swim for a week, they’re these little microscopic breadcrumb size swimming things that are green-colored.  They’re quite cute even at the earliest stage. They’re pretty adorable under the scope and right now we have them in culture buckets that we’re giving flowing seawater to and they’re flowing back and forth between bucket pairs. Some of the buckets have acidic seawater simulating ocean conditions we expect in 20 years while some of the buckets have the pH of the current ocean, and so it’s been a really great process getting them through the larval phase all the way until tomorrow when we’re going to settle them. It’s been a very action-packed week.

Q: How does settling happen, and where do they settle?

Daniel Swezey: In nature they settle on coralline algae, which is a pink calcifying red alga found along the California coast.n captivity and in abalone farms they spread diatoms on surfaces for them to settle on. Diatoms are single celled plankton that cover the sea floor in nature, so a diatom layer is a more controlled environment that we give them after they finish swimming. he abalone kind of float down when they’re ready - right now they look like little nautiluses (if you know what those are) - kind of like little shells with tentacles, almost like little squids but very, very, very tiny, and when they settle they cue in on the diatoms and different cues on the seafloor. At this point, they’ve swam for a week and so they’re ready to use their last energy to turn into a snail. They go straight down and the nautilus flattens into this pancake-shaped abalone and then for the rest of their life they’re that flat pancake-like shape.

So tonight and tomorrow they’re going to be running out of energy, getting ready for the next phase, and then tomorrow morning when we come in they’ll probably all going to be going down to the bottom and turning into the abalone that we know.

Q: Where do you see the results of this project helping the most? What do you think the biggest impacts will be?

Isabelle Neylan: I think there are two things that are really cool about this project. The first is our understanding about basic science. How does the experience of a parent affect the experience of the offspring? That’s kind of an open question, and then I’m really curious about thinking about applications. So, for aquaculture, in particular, these are the animals that have been raised in an aquaculture setting through the lab, but this also applies to animals out in nature where they’re going to be experiencing more acidified oceans. So, if moms are able to adapt and give their babies a better fighting chance that’s good news for natural populations as well.

Daniel Swezey: Like Isabelle says it's a little of both. We’re concerned about what’s going to happen in the wild, so that’s a big part of this because we know the ocean’s changing. The ocean is getting more acidic, and red abalone populations have been doing very poorly over the last decade here on the California coast. After some major population declines linked to ocean heat waves and kelp loss, they don’t seem to be rebounding very well. So understanding what other impending ocean stressors could do to them on top of the challenges they already face is very important for managers of the fishery and the people that want to see and fish for red abalone in the wild.

It’s also important for aquaculture because the only way you can eat red abalone legally now is to get them from a farm. You can’t dive for them anymore, and as the ocean changes, seawater chemistry is also changing aquaculture farms, so they’re affected in the same way that wild populations are. If the pH drops in the ocean near a farm, then the whole farm's pH also drops, and that can have the same consequences for captive animals as wild animals. So helping growers understand what the negative consequences are going to be and what they can do onsite to mitigate those impacts is very important

One thing we’re pursuing is breeding. Maybe there are acidification tolerant varieties. Those are the ones we should be breeding in the future. And then Isabelle’s question of should we raise the moms a certain way to set the offspring up for the future, and can the mom prime her babies to be ready for a challenging ocean. That totally applies to the growers, too, because if they have a strategy for raising moms, that really helps with their yields. That’s an important thing, so there’s lots riding on all this, and lots of information that we’ll hopefully get.

Q: What has been the most special part of this project for you?

Isabelle Neylan: This project was a lot of work and effort. We had a ton of help and people who came in and collaborated, and just a huge teamwork effort for pulling off such a big, ambitious project. I think when we proposed to do this we went big and realized that that was probably not quite what was going to happen, and now we kind of are achieving what we proposed to do, which doesn’t always happen in science. So it’s still kind of sinking in that we had such a successful spawn and that our babies are actually here and swimming. You know, we’ve been talking about this project for a long time, so the fact that it’s a reality was pretty wild.

Daniel Swezey: There’s a lot of gratitude for so many people that have been involved and we couldn’t have done it without the volunteers and the years and years of experiments with a former BML grad student (now postdoc) Sara Boles, Kristin Aquilino, the Whitehead Lab, and the Bodega Ocean Acidification Research Group group, all leading up to now.  It took a lot of effort to figure out how to do this all the right way, so I’m just very grateful to have been a part of it for the last 6 years

Update: As of July 2021, this experiment is completed, with the offspring having been successfully raised to the age of 3 months. Dan and Isabelle are working on gathering additional data and will be analyzing all of the collected data soon. Watch for more updates as their results are released.

Learn more about how red abalone are impacted by ocean acidification in this video and article about research conducted by Dr. Daniel Swezey and other researchers at Bodega Marine Laboratory:

And explore the overlapping stressors contributing to the decline of red abalone:

No, not because of Fukushima: An Explanation of Northern California’s Red Abalone Decline

Finding a mentor in college could be your favorite homework