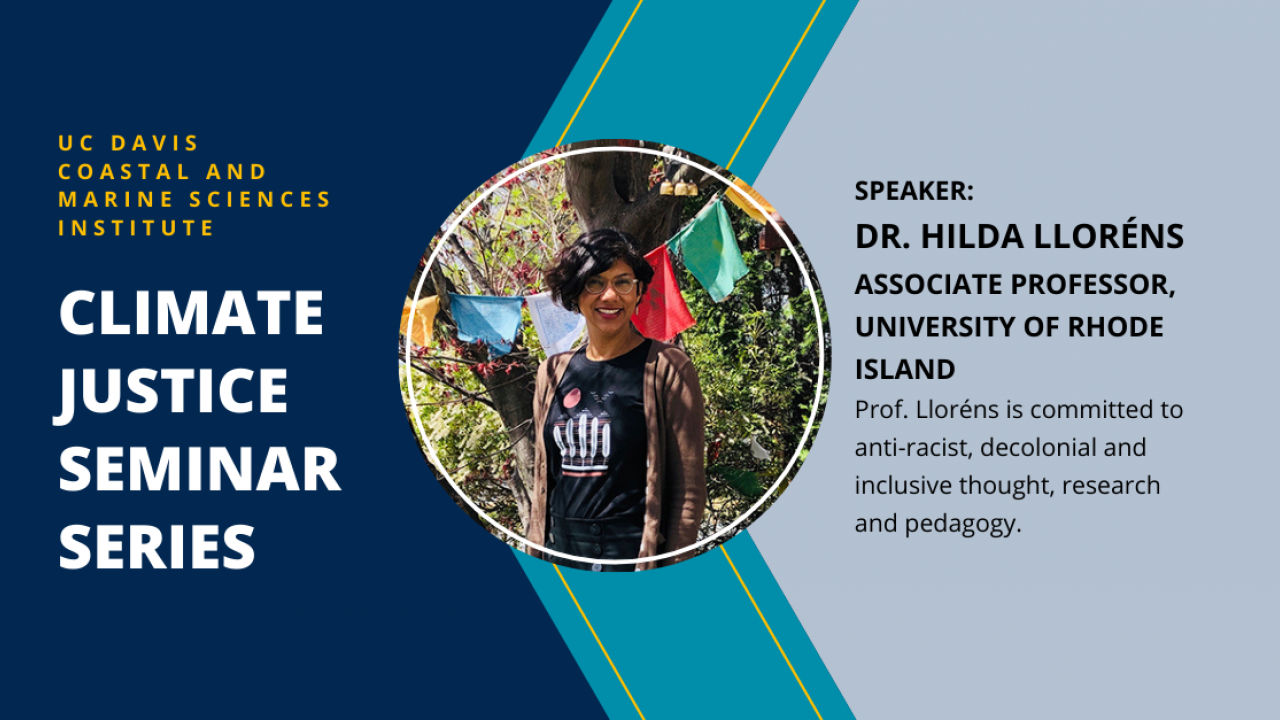 On May 3, 2021, the UC Davis Coastal & Marine Sciences Institute hosted Dr. Hilda Lloréns, an Associate Professor at the University of Rhode Island and an author of multiple books. Dr. Lloréns is a cultural anthropologist and de-colonial scholar whose research is centered on how racial and gender inequality manifests itself in access to environmental resources and exposure to environmental degradation. To do this, she often uses the method of auto-theory/life-thinking in which she uses her own family’s experiences to offer a counter-discourse to the history lessons taught in schools that recount certain historical events from the perspective of the colonizers and not from the perspectives of the oppressed. During the seminar, Dr. Lloréns detailed the work she has been doing to combat environmental injustices in the southeast region of Puerto Rico since 2015.

Most of Dr. Lloréns’ recent work has been centered around studying environmental injustices in the Jobos Bay region of Puerto Rico. The injustices affecting communities living in the bay have deep historical roots; when Africans were taken from their homes and brought to Puerto Rico as enslaved laborers to work at the sugar plantations and mills in the bay area, they were made to live by the water, while the white managerial class of workers lived farther inland to avoid the undesirable mosquitoes and swamp area. This divide of social classes had long-lasting effects, and the region by the bay still remains one of low socioeconomic status and one of the highest concentrations of Black-identifying individuals in all of Puerto Rico.

The mid-20th century industrialization of Jobos Bay transformed the region from sugar mills into what Dr. Lloréns refers to as an “environmental injustice hotspot” or a “sacrifice zone,” meaning that it is heavily loaded with contaminating industries from the military to recycling, and from energy production to oil refinement. The two main pollution sites, among many others, are the energy-producing Aguirre Power Complex and the AES Coal Power Plant. The Aguirre Power Complex uses bunker sea oil and diesel to create energy, causing large amounts of air and sound pollution. The AES Coal Power Plant produces energy from coal, which creates 300,000 tons of coal ash waste annually that is loaded with heavy metals, radioactive isotopes, and more toxins. This coal ash waste is piled into a mountain and left exposed to the elements, resulting in the contamination of the local watershed, drinking water, and air. Although many of us have experienced exposure to coal ash as a result of the major wildfires that have ravaged California, this exposure is acute and temporary; however, for residents of the Jobos Bay region, this exposure is constant and year-round.  Over 100,000 people in this region do not have access to clean drinking water as a result of this toxic coal ash waste leaching heavy metals into the aquifer, and there has been a 70% increase in cancer in this region since the coal plant opened in 2002.

“In these communities, people are paying for [tourists’ negligent uses of energy] with their health, and not really getting any benefits from it. These entities do not employ the community people.”

Dr. Llorens points out that while many coal plants in the global north shutter, new coal plants open in the global south, like the private AES coal plant. The AES coal plant opened in the 21st century to satisfy the energy demand of tourism in San Juan, where tourists are typically from the global north and unaccustomed to the heat of Puerto Rico. While the energy is used to cool hotel rooms and tourist venues, the southeast residents pay for the North’s energy with their health—Dr. Llorens therefore argues this is a case of climate apartheid. Further, the southeast residents do not even benefit monetarily from the coal plant as they are not employed by the plant, rather the austerity measures forced two of the three hospitals in the region to close, limiting health care access despite staggering cancer and asthma rates. In addition, when outages occur, the people in this Jobos Bay community region are typically the last ones to have their power restored.

“The case of environmental injustice in Jobos Bay is a clear example of the lack of distributive and participatory justice.”

The community in Jobos Bay has been forced to contend with historically heavy and unequal industrial loads in comparison to the rest of the Puerto Rican territory, and they have been subjected to a lack of access and outright denial of participation in making decisions that affect the region’s ecology and the community’s quality of life. This is a result of the lack of recognition that the Afro-cultural identity receives from the State, and Dr. Lloréns argues that pursuing State recognition of Black culture and identity could be a way to guarantee the rights, access, and protection of these communities and their ecological practices.

AES restricts access to foraging grounds and the Aguirre Power Complex produces thermal pollution in the bay which forces fishing grounds further offshore. One way that the Jobos Bay communities are fighting back against this oppression is through ecological resistance. This is a practice of community stewardship where access to coastal resources for fishing, foraging, gardening, and commemoration are central to reminding people and the State that the area is useful, full of life, and meaningful to coastal communities. Ecological resistance is also aimed at forcing the State to recognize Black and Afro-Puerto Rican ecological knowledge, such as the practices of land-crabbing, harvesting mangrove oysters, and other cultural community practices.

If you’re interested in Dr. Llorens’ work and would like to learn more, you can read her most recent book titled Making Livable Worlds: Afro-Puerto Rican Woman Building Environmental Justice, which details her work in the Jobos Bay region in Puerto Rico since 2015. The book is available for purchase here. Additionally, she recently co-authored a bilingual children’s book called Environmental Justice is for You and Me, which can be downloaded for free at this link and will be available to purchase this fall. The book is available in both Spanish and English and defines key concepts about environmental justice for young learners with the purpose of creating awareness about threats to the environment and of encouraging community participation to achieve environmental justice.

Jenna Quan is a fourth-year undergraduate student majoring in evolution, ecology, and biodiversity and minoring in education. She has a passion for ecology and biology, especially in marine systems. Upon graduation, she hopes to pursue a PhD in ecology and continue on in academia. When Jenna is not working on research projects at BML or in a genetics lab, she is co-captaining the UC Davis Dance Team and working on her knitting projects!

Pathogens Can Hitch a Ride on Plastic to Reach the Sea

To Save California’s Whales, Put Overlooked Threats Into Policy