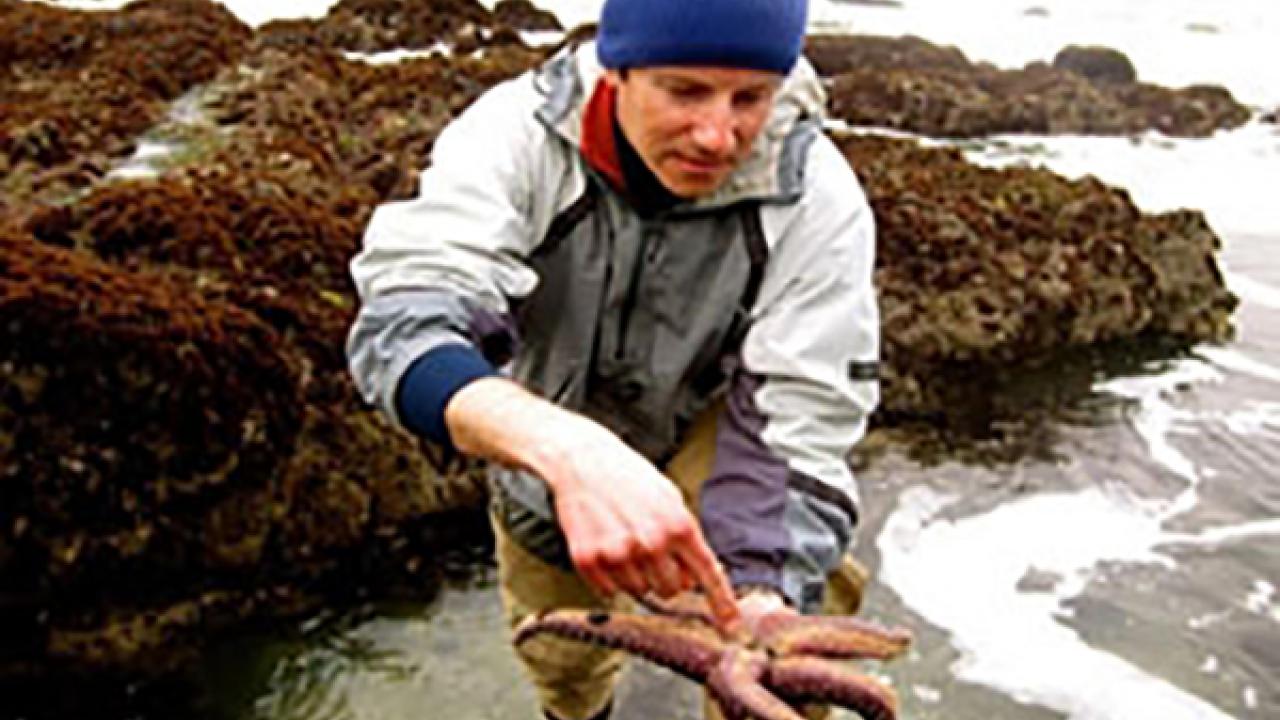 Jay Stachowicz is a Professor of Evolution and Ecology and studies biodiversity among marine ecosystems.

Can you please introduce yourself, including name, department, and anything else you want people to know about your background?

I’m Jay Stachowicz. I’m in the department of evolution and ecology at UC Davis. I have been at Davis for about almost 16 years. I grew up in New England and I’m a lifelong east-coaster- the first time I came out to Davis was for my job interview. I guess it went ok because I’m still here. I’m a marine ecologist, so I study the patterns—both the causes and the consequences—of biodiversity in nature. I’m interested in what causes there to be more species in some places and fewer in other places. Also, I’m interested in what the consequences of that variation and diversity are for ecosystems. I’m curious as to what are the consequences of loss of species. I don’t necessarily mean extinction per se, but, functional loss of species—where a species is so low in abundance that it doesn’t do much in that ecosystem. Does it matter? Can we get by with just a few? Do we need a lot? And under what conditions do we need a lot versus a few?

I now teach invertebrate zoology, but I have been teaching marine ecology and introductory biology here on campus for quite some time, and enjoy both of those. I try to have as many undergraduates working in my lab as I can. For the on-campus work, a lot of that is just plowing through bunches of preserved samples, so it’s certainly not super glamorous work, but I do take a few undergraduates out to the marine lab every summer. They spend the whole summer out there with me in my lab doing research, sometimes doing independent projects, and also helping us out with ongoing projects and getting some cool experiences. I wish I could do more of that, but, the ocean is just far away enough from Davis that it’s hard to get undergraduates involved in fieldwork during the academic year.

How did you get into your field, and what motivated you?

As an undergraduate, I knew I liked biology, and I knew I didn’t want to be a doctor. Those two things were certain from a pretty early age. In high school, I had this very cool class—my bio class as a senior—where we went outside and did a lot of sampling of local forests and I learned about forest succession and how you can discover how old a forest is by what species are there. I thought that it was really neat that the organisms on the landscape weren’t static—that there would be different species over decades or over generations and that there was an ordered biology to it. That sort of set me up to be interested in species interactions. As I went away to college, I knew I liked biology, but I wasn’t sure if I wanted to go towards the environmental science and policy route or the ecology, field science route, so I took classes in both areas and just found that the science did it for me and policy didn’t.

I did a study abroad program where we went to Costa Rica and basically they would take us to national parks and drop us there for a week, give us a half a day lecture, and then say “ok, go find a research project and present it to us in three days.” It was really daunting, but actually it was great because you really learn how to make observations, learn how to ask an answerable question, and then answer it, and you just keep doing that over and over and over again as you go to more and more parks. The projects were all baby projects, but just going through that exercise of asking questions and answering them—I realized that this was what I want to do. I hadn’t really done any marine research at that point though—mostly just forest research, so I got interested in plant-herbivore interactions. One day I was talking to one of my professors and he said, “you know, if you like marine stuff (which I did, even though I hadn’t really done much of it) and you like plant-herbivore interactions, you should go work with this guy”. So I called him up, had a great conversation with him, and ended up going to work with him. The rest is sort of history from there. I am really interested in how ecological systems work, how they are put together, and how tinkering with them messes with them.

What would be your dream project? What research question do you wish you could answer?

I have become really interested in microbial communities associated with marine macroorganisms—especially seagrasses and their root symbionts. Unfortunately, it just isn’t easy to manipulate them. You can’t really easily add or subtract microbes (that we currently know of), but if we could, that would be really cool. I would love to do an experimental project on the microbiome of seagrasses. We have known for a long time that seagrasses play a huge role in ecosystems, but how much of that is because of the microorganisms, and how much is just because of the plant? How much of all of the variation that we see in seagrass beds and seagrass communities has to do with microbial ecology rather than macroorganism ecology? I would love to know these answers.

I have a project right now where we have sampled seagrass microbiomes in 50 locations all over the world. We’re comparing the patterns in the biogeography of the microbes, the biogeography in the genetics of seagrass, and the biogeography of the animals associated with seagrass to see whether there are sort of common drivers of diversity across all of these systems and whether community assembly proceeds the same way in microbes, plants, and macroinvertebrates. This is the closest that I am to answering my question about marine microbes, but I feel like we are at the dawn of the time at which we can do real ecology with microbes, and it’s going to open up this huge window into ecology.

Do you have any advice for aspiring marine scientists?

I would say to find out what your passion is. Find out what excites you and follow it. But also, don’t get paralyzed by thinking that you have to find the one thing you are interested in alone—some people are really passionate about a particular group of organisms or an ecosystem, and it’s clear that that is just what they are going to work on, but I think many really good scientists aren’t like that. They probably would be happy working on a lot of different things. What they end up working on will probably end up being a product of where they go to graduate school or what strikes their fancy when they happen to be looking for a project. I think sometimes you can stress too much about exactly what you want to do before you go off to graduate school, so it’s ok to be a little uncertain.

Also, I would recommend picking up some technical skill (whether it be in mathematics and modeling, statistical analysis, genetics, biochemistry, etc.)—some technique that you have that is distinct and that most people don’t have, because it will open some doors for you. I don’t necessarily mean as an undergraduate, but as you develop your career as a marine scientist, think about things that you can do that involve more than just counting stuff. Anyone can count stuff—what else can you do?