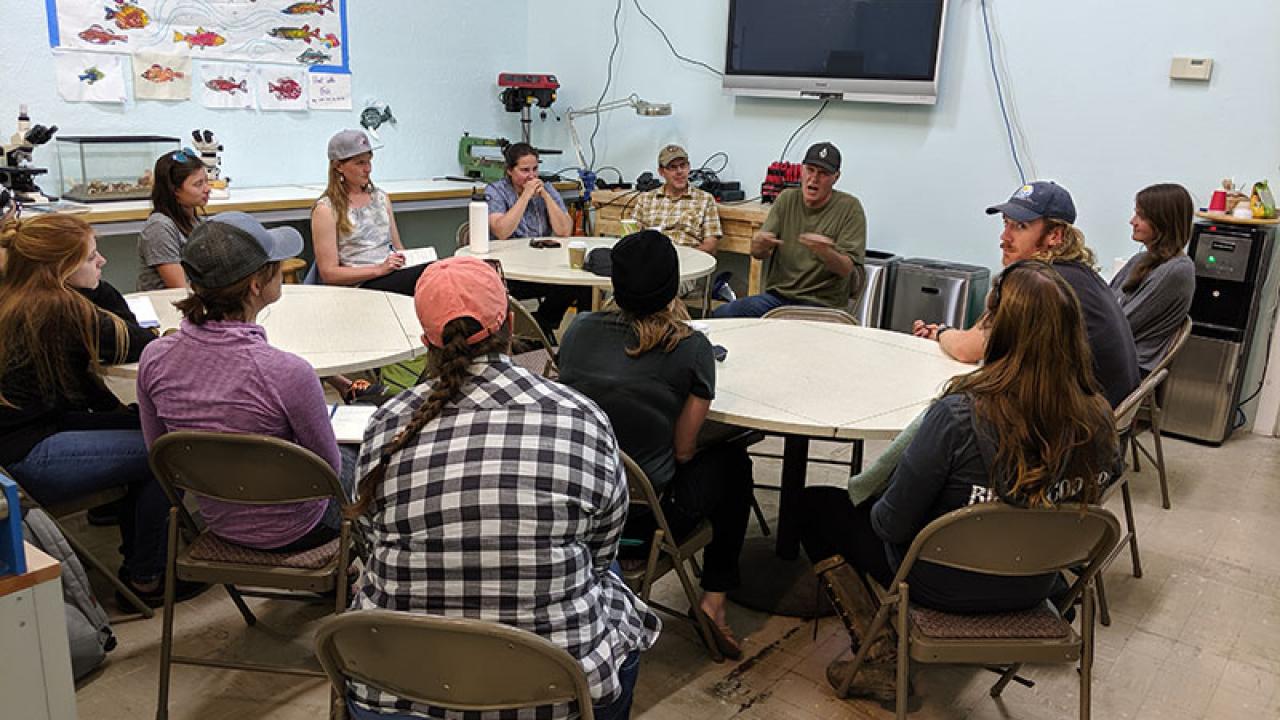 In June, students in the Sustainable Oceans NRT Program journeyed across California’s North Coast, meeting with residents, scientists, and managers to learn about the issues facing coastal communities. Here, Ellie Oldach recounts an experience visiting a marine science center and speaking to Pat, a local fisherman in Fort Bragg, CA. This article is printed with Pat’s permission.

The first thing we notice on entering the Noyo Center, Fort Bragg’s marine science and community hub, is a geodesic dome installed in the back of the room.

They call it the “immersion dome”. Crouching, we duck into the dome, then gaze around at the underwater scene projected on the walls of the dome. Scuba divers drift by carrying quadrats and transect tapes; the sound of bubbling regulators fills the space. The setting we’ve entered is the rocky reef off the coast of Fort Bragg, where scientists are diving to survey urchin and kelp populations. The video was shot as a way to document the survey, and share how things are looking to folks back on land.

And how are things looking? Pretty eerie. 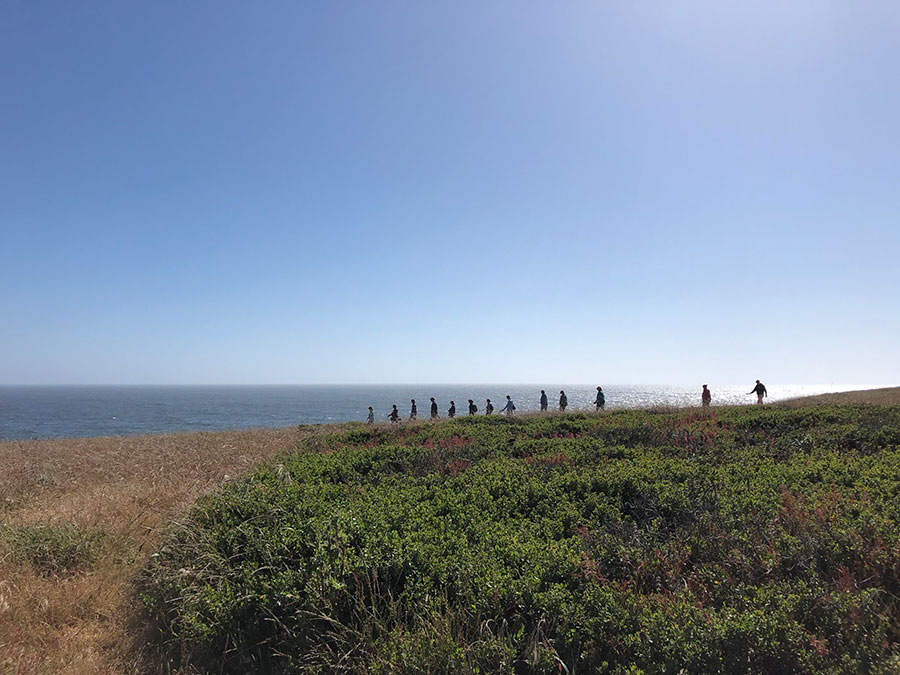 Fort Bragg, ten years ago, even five years ago, was edged by a kelp forest coastline. Thick beds of Nereocystis and Macrocystis, bull kelp and giant kelp, provided the basis for a rich forest community. Urchins and abalone, nursery fishes, found food and shelter in the thick stands of kelp. That’s not the world the immersion dome shows— instead of kelp, we see bare rock. Gray instead of green. Bald instead of forested. And dotted, all over, with small, spiky balls— purple urchins.

A voice comes from outside the dome. “That’s really exactly what it looks like, I was just out there and it looks that bare.”

We turn to see Pat. He’s a local fisherman, a longtime Fort Bragg resident. We’ve arranged to meet him here at the Noyo Center to hear more about the changes he’s experienced along the northern California coast. Everyone scrambles up, makes introductions. We move into a back room of the Center, and settle in to hear Pat’s tale.

It doesn’t take much to get Pat talking. With just a few questions, he begins to unfurl a story of dramatic ocean change.

Pat’s been making a living off the coast of Fort Bragg since 1987. He was always in love with the ocean— as a surfer, first, then as a fisherman. Here in Fort Bragg, he’s made his living diving for urchin. Pat paints us a picture of how that used to look.

“When I first came here,” he tells us, “the ocean floor was just a blackout, a carpet of red urchin.”

Those red urchins, or “reds”, were the fodder for a valuable fishery. Reds were fished, processed for their gonads, and shipped to Asia as uni, the popular sushi component. For years, these urchins were plentiful, and demand was high.

“This little stretch here kept me working,” Pat explains. “I never had to leave.”

All of this rested on a healthy kelp forest. Pat is well-aware of that. He describes cutting through stands of kelp to disentangle himself, mid-dive. There’s a stark difference between the underwater world he describes, thick with kelp, and the one we entered through the immersion dome. Now, the kelp has been replaced by bare rock. The reds have been replaced by their cousins, the purple urchins.

This change— the replacement of kelp forests with purple urchin barrens— happened fast. It’s been attributed to several stressors. One likely cause is the loss of predators. Sunflower seastars and otters were once plentiful predators of purple urchins; for a cacophony of reasons their numbers have declined, allowing purple populations to increase unchecked. Purple urchins are ardent kelp eaters, so the increase in purple populations led to high levels of grazing stress for kelp.

Locally, purple urchins are referred to as “purps”. It’s tempting to think of them as “perps”, too— as in “perpetrators” behind the kelp die-off. However, a bigger culprit is likely at work here. Warming oceans are linked to the decline in predators and  subsequent rise of purple urchins, and have also impacted kelp directly. “The Blob”, a plume of abnormally warm water that spanned the coast starting in 2014, exposed forests to hot water and diminished nutrients. In combination with the grazing, the result was widespread kelp die-off. Warming oceans, of course, are a result of rising global temperatures, brought on by increasing concentrations of CO2 in our atmosphere. The hunt for a true perpetrator leads right back to humans.

As kelp declined, increasing numbers of purple urchins have lost a major food source. At this point, the purps are starving. Starving urchins produce skimpy gonads that don’t attract much interest in the market. For fishermen like Pat, that’s bad news. It limits potential alternative livelihoods, other species he could turn to as he searches to fill the void left by the red fishery. 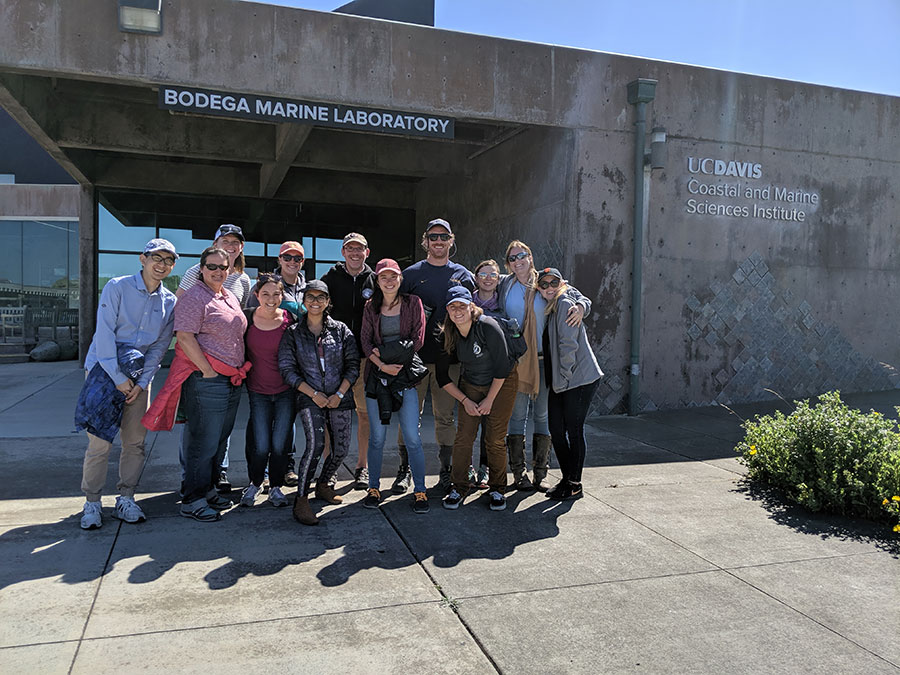 Pat’s son is also an urchin fisher, against Pat’s advice. The two of them still can find reds, if they go deep enough. The purple urchins don’t like deeper waters, so reds find refuge at 60, 70, 80 feet down. But harvesting that deep comes with a price.

“At the end of the day diving 80 feet, you feel like you just cut a cord of wood,” Pat says. It’s exhausting, physically, to work at those depths. It’s dangerous, too. Fort Bragg has already lost divers to decompression sickness.

Some divers continue to take that risk, to dive deep for the chance to harvest reds. It’s enough to sustain, barely, a few processors and workers. But it’s nothing like the heyday, when hundreds of people— divers, processors, shippers— found work in the red urchin fishery. With this option diminishing, fishermen have had to turn to other options.

“Guys from here went to San Diego or Alaska to work,” Pat says. “Or they had another job.”

For Pat, determined to stay in Fort Bragg and committed to a life on the water, moving or getting out of fishing isn’t an option. Instead, he’s been looking for local places where he may still be able to find kelp, and reds, and an absence of purps. It’s slim. There are some healthy patches, still, to the north and to the south— but they’re encircled by marine protected areas, which means they can’t be fished.

There may be another option. Efforts are underway to remove purple urchins— and maybe to help fishermen in the process. Thanks to funding from a variety of streams, Pat and other urchin fishermen have been paid to harvest unsellable purple urchins. His catch isn’t sold. Instead, purps are counted, sampled, and destroyed. Removing purple urchins from the ecosystem through individual harvest is an effort to reduce pressure on the kelp and provide relief to fishermen, too. “The removal project has helped me out a lot,” Pat tells us.

A developing “sea-ranching” venture looks to take this a step farther, harvesting purple urchins and then raising them in captivity, fattening them up on farmed kelp diets. With the proper feed, their gonads may grow plump and marketable again. It’s another incentive for local fishermen to focus their efforts on removing purps from the Fort Bragg barrens.

It’s unclear whether these local efforts at purple urchin removal will be effective at flipping an entire ecosystem from urchin barren to kelp forest. But, Pat tells us, he can see the change happening at a small-scale level.

“We can see where we went last year,” Pat tells us. The seafloor, a year later, looks different. It’s not the carpet of red urchins it once was, but the purples have been lessened— at least a bit.

It may come back later, but where does that leave fishermen now?

This story doesn’t have an easy conclusion. And we don’t feel easy, either, as we gather our things, thank Pat, and get ready to leave the Noyo Center.

Many hands joined the project, contributing scientific knowledge, skill with a welding torch, and labor to the effort. Together, the orca carcass was transformed to a skeleton that people could visit, touch, learn from. Standing (or swimming?) now in the center of the Noyo Center, it’s testament to the work this organization is trying to do: bringing different parts of the community together to understand and work with the changing ocean. In the tangle of climate change and fisheries and livelihoods and community, the need for that kind of joint effort stands out clear. We carry Pat’s words and the image of the orca as we continue our travels down the Northern California coast.

Learning From Jellyfish and Ancient Cholesterol