Dr. Susan Williams (1951 –2018) was an internationally recognized Marine Biologist and UC Davis based professor of marine biology whose research pushed the boundaries of science and redefined international policy. Dr. Williams graciously took the time to answer some of our questions below. 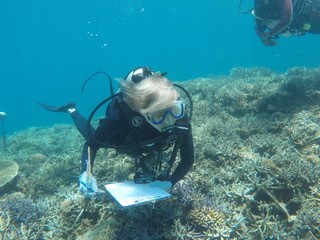 Can you tell us a little about your background and how you eventually became a marine biologist?

I wanted to be an oceanographer since second grade, without understanding what that meant other than being fascinated by "things" that washed up on the beach during seaside family vacations. I was always interested in science, including failed experiments to make my younger sister disappear. As an (first generation) undergrad, I went on a Woods Hole Oceanographic Institution research cruise and ended up doing a research project there, which confirmed my career choice (and I didn't get seasick as some did some of my fellow students who then left oceanography). But, after my MS degree in Biological Oceanography and many more cruises, I realized I wanted to do manipulative experiments in shallow systems such as seagrasses and coral reefs and so I transformed into a marine ecologist during my doctorate.

What have been some the highlights and biggest learning experiences from your career?

Most days have highlights, but being in the field and seeing patterns in nature and then uncovering the underlying mechanisms through experimentation is my biggest joy. I've been able to work in awesome places such as Indonesia and the Aleutians and Arctic Ocean. My biggest learning experience has been technical- I can master any complicated instrument or protocol and should not hesitate to propose a new method or to jump in with a volt meter. I learned this because my advisers were never around to help at my remote field sites in the days of snail mail as the only means of communication. More recently, I'm learning to collaborate across huge divides in culture and language (US - Indonesia) and where there is little infrastructure to support research.

Congratulations on becoming a Fulbright Specialist! What is your role and goal(s) for this position?

Thanks! As a Fulbright Specialist in Environmental Sciences and a representative of the US through the State Department, my role is to help build science capacity in other nations. Specifically I am working with the marine science faculty at Hasanuddin University in Sulawesi, Indonesia to achieve their vision of improving their international ranking. This means lots of workshops and advising, from experimental design and deploying field experiments to science ethics to publishing in international journals to analyzing their organizational structure and curriculum. Until just recently, my colleagues did not have access to international science publications, so there is a lot to do.

Your last project on seagrass in Indonesia illustrated that biodiversity is both a means and an end. What are your next steps? How effectively will this translate into restoration?

Starting restorations with a diverse mixture of species instead of a single species makes a lot of sense where species naturally co-occur, but it butts up against how restoration of seagrasses, salt marshes, mangroves, and coral reefs is practiced. The next step is to communicate the importance of including biodiversity in restoration practice by working with practitioners and management agencies. In the past, NOAA rapidly took up my recommendation to include genetic diversity when restoring eelgrass, so this next step isn't a challenge. My Indonesian colleagues and I wrote guidelines for Indonesian seagrass restoration. And, two weeks ago, Northeastern University's Professor Randall Hughes, a UCD graduate, led a collaborative publication on the lack of attention to biodiversity in restoration practice in general (Conservation Letters doi: 10.1111/conl.12419).

Being located in Bodega Bay, Davis, Indonesia, and elsewhere in the world, how do you decide what projects you get involved in? Once you publish a study, do you stay involved in seeing where it goes (be it policy, conservation, or further research)?

I get involved when I see a gap in knowledge, which is usually what motivates me most to take on a project, but I also get involved when a colleague asks me to collaborate. I also want to see some potential for the application of the research. I stay involved in applying my research to policy and conservation and management, through outreach to non-government organizations, elected officials, resource managers, and most recently, private business. I also like to go after paradigms, perhaps because I am contrary but often just because I get tired of cycles of publications that state the same thing. I however don't stay involved in any particular research unless I can clearly see another question. Otherwise, I switch subjects (but within marine ecology generally). Switching means a steep learning curve but that makes it interesting for me personally.

Finally, what is the best piece of advice you have received, and what advice can you offer to aspiring marine biologists?

Best advice- "Ideas are cheap, but implementation of ideas is rare."  The advice I'd give comes from my father, a blue-collar worker, who told me to pick work I love because I'll spend most of my life doing it. In that vein, I tell aspiring marine biologists to go for it but give it time to see if marine biology is a good fit. And also, always remember that a career choice shouldn't be a trap. There is always something else to do and it likely will be equally engaging and challenging. I packed up and left four other universities before coming to UCD, and I also worked for the federal government twice. I stepped down as Bodega Marine Lab's director after nearly a decade and thinking I would retire in the position. It was a scary change to return to a full-time professorship after being an administrator but if I had remained in the position I would not have been able to start collaborating in Indonesia. There are always trade-offs in anything we do.